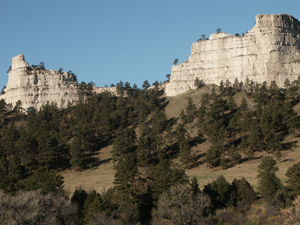 In Indigenous worldview, the land has a powerful voice and imparts its wisdom to anyone who knows how to listen and learn. People of contemporary modern culture, by comparison, live within a worldview that believes the land is not a living entity but a commodity or “natural resource”.

2. The land is the source of animals and plants whose bodies are made of its elements, soils, and waters. The land is likewise a source of language, ritual, dream, story, law, and wisdom of many different kinds. However: We do not mean that we “worship” the land. We respect the land for its wisdom and the role it plays in all life. Showing respect for an individual human being is not “worship” of that human being, and the same is true for the land.

3. The land naturally provides living beings with all the things they need to survive well. Native plants, animals, and people should ideally be able to live in a given area without importing anything (food, water, or other resources) from somewhere else. That is the true nature of the concept that modern culture calls “sustainability”.  Sustainability is thus not a human-created concept or ethic, but a natural one.

4. Everything is part of the land in some way — human beings, other animals, plants, stones, water, stories, rituals, dreams, and other things — so we can learn from all these things equally, though in different ways. They are all parts of a single whole, connected and related at many levels. This is the true nature of the concept called “ecology” in modern culture. It means that ecology, too, is not a human-created concept or ethic, but a natural one.

Finally, it should be pointed out that many people of the dominant culture think of primarily (or only!) “dirt” and “rocks” as “the Land.” Our concept of the Land includes everything that exists on or within the Earth, including all the living beings of every type, and also all the waters and seas, the air and clouds, and all the planetary and stellar bodies of the cosmos that are deeply connected to the planetary body we call home.

Important Note: The statements on this page are not intended to express “Indigenous worldview” about the land in any universal or representative way. They represent the views of Tapestry’s founder and are provided to facilitate communication and good relationship between Tapestry and the non-Indigenous people and organizations we work with, who may be unaware of the critical differences in worldview between us that can lead to misunderstanding and frustration.It