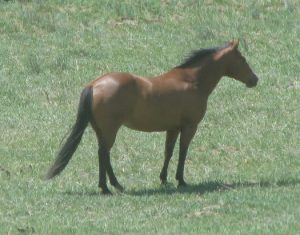 “Sit here on the ground with me,” I encouraged the hesitant woman. She was an older beginner rider who had contacted me because she was afraid of riding her horses. She wanted to ride but didn’t know how to get past her fear. As we stood in her dusty, New Mexico arena, I told her to sit down on the ground and not worry about getting her horse yet. “One of the things that can happen when we have fear with riding is that we feel disconnected and out of control. What you need to realize is that we are always connected to the Earth. You are not disconnected. When you are riding, your horse’s feet are right here on the Earth. You are connected through your horse. Through each footfall. Feel that connection.”

When the woman got on her horse, I helped her to continue feeling connected. It’s easy to think that being on a horse means we’re suspended several feet about the ground. But that’s simply a perspective. In reality, we are still connected. As I held her horse so he wouldn’t move, the rider closed her eyes and felt her connection down through her body and then into her horse. From there, we mentally went down each of her horse’s legs until the rider felt that she was very solidly connected to the Earth with four horse legs and hooves connecting her to it. From that point forward, the rider was able to ride her horse and handle her fear whenever it arose. Whenever she rode, she took time at the beginning to connect with her horse. If she got scared while riding, she simply reconnected with her horse’s legs and their connection to the Earth. 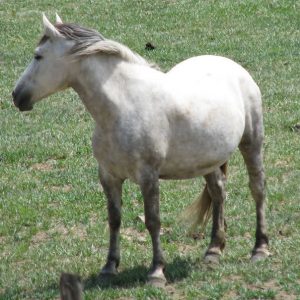 But the horses can teach us, just like they taught that fearful rider, that we are always connected. We are never truly alone even in this time of self-isolation and physical distancing. You are probably sitting or standing as you read this post right now. Take a deep breath and think about your feet. Think about your body. Where are they? What do they feel like? They are connected to the Earth, whether your feet are actually on the ground – remember, your floor eventually goes down through layers and meets the Earth – or your body is in a chair that is connected to the floor. We are always connected. Through the Earth, we are connected to each other. Every single human being on this Earth is connected right now. No one is alone. YOU are not alone. Feel the connection and breathe.

Indigenous understandings of the world and of life are woven deeply into the American experience in ways you simply don’t notice. Here’s an example, one that should give you a lift of powerful joy. It’s from the very end of the main number for which the movie “Oklahoma!”(1) is named. The scene takes place at the end of the story. Watch it once, just to enjoy it and feel the lift it gives you. Then read my explanation below, and watch it a second time with new eyes and ears. (See footnote for full citation.)

The Land itself speaks to you through this little film clip. Here is why I say that. First, the word “Oklahoma” is in the Choctaw language. I have always loved it that this production has all these non-Native people crouched down and rising up, chanting in Choctaw. What they are saying is “Indian Nations” in Choctaw, the language of one of the Five Tribes sent in the 1830s to what has since become the state of Oklahoma (2). The non-Native people in the movie represent settlers who moved into Indian Territory, despite promises it would always be land set aside for Indians. In the film clip, they are chanting “Indian Nations” in the Choctaw language! And here is the salient point about that: we Native people see our languages as having been given to us by the Land itself. So there’s actual, real power in this chanting.

Second, these non-Native people are doing what sure looks to me like part of a Round Dance. At the beginning there, when the people in the middle are crouched down, there are two lines of people moving in opposite circles around the outside of the crouching group. You see that in a very big Round Dance that winds far enough to turn back on itself. The people who choreographed that scene might say they hadn’t ever seen one of our Round Dances or weren’t thinking of it if they had. But we Native people believe our dances were given to us by the Land, too. So I would ask, “Where do you suppose the idea to have people circle this way during this chanting came from?” I think there are things moving here a lot of people just don’t see at first.

By the way, if you want to say there are, in your own homeland’s culture, dances that circle this way . . . well, that Land of your culture’s home provides people with dances too. That’s how we see it, anyway. It’s not just our Land here that does this. A Circle is a very important shape and often shows up in dances, designs of many kinds, and in natural structures such as nests, dens, and lodges. The point is: a circle is an important natural shape that manifests important attributes of the Land, and that therefore shows up in dances the Land inspires. And there it is, right in that movie scene. The Land is literally moving through those dancers and the choreographer.

The words of the song are telling you that you know the thing it’s telling you — the thing that runs counter to one of the most fundamental principles of Western culture, that people own the land. It’s telling you that’s not how it is, and that you already know this. The song’s words say, literally, that we all know, deep inside, that we belong to the Land. Oscar Hammerstein II, who wrote these words, was of Jewish and Scotch-Irish descent (from what I was able to learn). He certainly didn’t seem to be of Indian descent.

Now watch the clip again, hearing the Choctaw chant and seeing the Round Dance and the strong assertion “We know we belong to the Land.”

Taking all these things together, maybe you can start to see why, if you look at this clip with Native eyes and ears, you start to hear and see the strong presence of the Land moving through all the people involved. Why does this matter? After the people sing “We know we belong to the Land,” they sing, “And the Land we belong to is grand.” That’s also a true statement, and a very important one. It’s true the Land is grand because it is literally the ground of our existence. It is written into your body — your bones, your teeth, your blood, your muscles. Where do you think the atoms come from that form your physical body? The Land is written into the bodies of all the people who somehow staged this incredibly Native piece of song and dance, too — a production number that brought audiences to their feet in live theaters and probably brought your heart to its feet just now. Because you could FEEL it, couldn’t you? A little like the way you felt something powerful moving in you when you played the videos of quarantined people calling and singing and clapping together from their apartments? You felt the power of knowing that we ALL belong to the Land, and the Land we belong to is grand, and that this connects us in a fundamental and essential way. The Land is grand, not for its military might or its economic muscle or its scientific prowess, but for its genuine life-giving POWER. This is why yesterday I said that we Native people are drawing on the Power of the Land to help us through this time, and suggested you might join us in doing the same.

You may not have been consciously aware that the Land is part of who you are, and you are quite literally a part of everything around you, but your heart knows this truth. It leaps with emotion when you perceive the deep connectedness between us. This is what Indigenous people mean when we say “we are all relations.” It’s an essential concept for these times. It’s what can help us, as a nation of people — not a nation of political ideologies or a nation of economic agendas, but a nation of people — to triumph over the challenge facing us now. There is great wisdom in the Land, and in real reciprocal relationship that can guide us through this time of terrible danger — if you can learn how to perceive and respond to it. More importantly, this wisdom can lead us into a powerful time of renewal on the far side of the events unfolding today.

Remember the power of paradox.

1. “Oklahoma!” 1955. Fred Zinnemann, Director. Sonya Levien, William Ludwig, Richard Rodgers, Oscar Hammerstein II, and Lynn Riggs, Writers. Magna Theatre Corporation and Rodgers & Hammerstein Productions. Oscar Hammerstein is the lyricist who wrote the words sung in this film clip. However, “Oklahoma” itself — Okla Humma — is Choctaw. This video clip is used under the Fair Use as stated in the Copyright Act of 1976, 17 U.S.C. § 107.

2. That forced migration is known as the Trail of Tears, and it was a hard time for many people. It’s estimated that about 2,500 of the 15,000 Choctaw alone (not counting the other nations) died of exposure, disease, and hunger on the Trail of Tears. That’s a fatality rate of over 16%. By comparison, the fatality rate of COVID-19 is roughly 2% of those infected. But not everyone is infected with coronavirus, which is why our actions now can make a difference. If we can reduce the numbers of people infected, it will make a huge difference in the number of people who die. Everyone who went on the Trail of Tears, however, was at risk for fatality. No one escaped the “infection” of forced relocation.

We’ve talked about how important it is to slow down and start living in Real Time if you want to get in touch with the beneficial wisdom of Indigenous Knowledge that can generate COVID hope. Here’s your opportunity to experience Real Time, at least a little bit, and the peace it can bring in a time of great anxiety. We all need COVID hope while we’re in quarantine, self-isolation, or shelter-in-place.

Play the video below. Focus on the sound of the wind in this video. Listen for the birds. Look at the grasses moving. Breathe. Let your body relax. Open your heart to the earth and the sky, the wind and the trees. Let the Land give you a sense of calm peacefulness. Exhale.

Now play the video again. See the area on the hill to your left at the beginning? There are fewer trees there because some years ago there was a very large and devastating wildfire that burned through this entire area — even the place where the photographer was standing to make this video! Why is this important? Because it reminds us all that sometimes things change, and in ways we consider devastating. That’s simply a part of life. But life goes on. And somehow there is beauty again. The world isn’t exactly the same as it was before, but the wind still blows through the grasses and the pines, the birds sing their winter song, and the sun shines even in a clouded autumn sky.

Life will come back again. Breathe. Relax your body. Release your anxiety. Resist the habit impulse to engage in displacement behaviors that will only make make your body more tense.

Watch this video whenever you want. It’s the Land’s gift of Real Time peace for COVID hope.