The Heart of the Earth Center, Yakni i Chukash, provides a platform through which Indigenous Knowledge can emerge from the reciprocal relationship between the Land and Indigenous people of many different nations.

“Heart of the Earth” refers to the very real power of the Land. The heart of the earth is the source of music, story, dream, justice, ritual, and life. In the northern Nebraska panhandle the phrase is doubly meaningful because the nearby Black Hills are considered the heart or source of all life and of the earth itself. Pine Ridge, the prominent land feature where we live, mirrors the southern and eastern edge of the Black Hills at a distance of 60 to 80 miles out. The name Heart of the Earth Center points to the Black Hills and the power of the Land that moves through Indigenous Knowledge.

Yakni i Chukash means “Heart of the Earth” in Choctaw, as translated by Choctaw language program Elder Dora Wickson. The underlined “u” represents a nasal tone on that vowel; you can hear the phrase pronounced by Tapestry founder Dawn Hill Adams if you click this link. The phrase does not refer specifically to the Black Hills, which has a name of its own in the languages of those who knew it first: Arapaho, Cheyenne, and Lakota. Instead, the phrase expresses the way that all Indigenous people understand the power of the Land’s living heart.

The image that represents Yakni i Chukash, Heart of the Earth Center, is based on the Circle that’s so important to so many Indigenous people. The Circle itself is the Land, marked by the four cardinal directions and the clockwise or sunwise movement of sun and seasons. The images in each quadrant carry the colors in a counter-clockwise direction to honor the dancing ways of Choctaw tradition. The Circle connects Yakni i Chukash to the way Tapestry models different ways of knowing and learning to help people understand and experience the processes of Indigenous Knowledge. Scroll down past the logo to learn what the image in each quadrant represents. 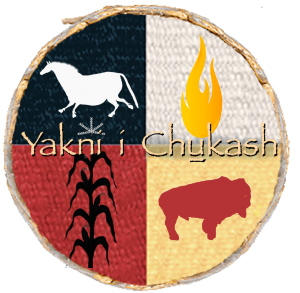 The circle itself is bounded by a hoop made of cottonwood, a sacred tree that marks water courses, gives people its limbs for firewood, gives its bark to horses and other animals for winter food, and sings the song of life-giving rain with its rattling leaves.

Each of the items in the four quadrants is meaningful in the life and history of Tapestry Institute, and each of them has a larger significance that matters as well. Both aspects are described in the following descriptions.

The buffalo in the East is part of this specific land here, where we live and work, of which Buffalo is a powerful part. Even when buffalo are not visible on this Land, they are deeply and vitally present. Buffalo are in the stones and soil of this Land. They are in the grasses shivering in the spring winds and the wildflowers of summer. They are an essential part of this Land’s health and well-being, of its life. The image on our logo is derived from a very great buffalo bull that Tapestry had the honor of being in relationship with some years ago when we previously had a herd of buffalo living with us in community.

The corn in the South represents the relationship between Corn and the Native people of this land, including the Choctaw people. Indigenous worldview does not see the Land and human beings as separate things, with “wild” and “domestic” being two different worlds. Corn, grown as we grow it, as it was given to us to grow, manifests the relationship and reciprocity between human beings and the Land. The image was made by working with composite elements from many pictures of corn plants, including those from our own previous gardens.

The horse in the West honors the horses that have been part of Tapestry’s work for many years. The image was redrawn and modified from a famous horse painted on the wall of Lascaux Cave in France about 17,000 years ago. We chose this particular image of Horse to help connect people of European descent with their own Indigenous roots, awakening what has lain dormant for so long and giving them a chance to recover the latent power of Indigenous Knowledge in their own lives.

The fire in the North represents the time of story-telling that’s traditional to many Indigenous peoples during the winter, and the central fires around which these stories are often told as people take shelter from the cold and dark. It reminds us all that Story, like the animals and plants depicted here, comes from and is part of the Land. More important, many stories may only be shared during the winter, which reminds us that Indigneous Knowledge is contextual. Story exists in a web of relationships that determine when and where it may be shared, and with whom. Fire is also a vital and natural part of the ecosystem in this part of the world. In 2006, fire paid a powerful and dramatic visit to Tapestry’s previous home on Pine Ridge.

We wish to thank Ian Thompson, Ph.D., RPA (Choctaw) for conversations that contributed to the development of this graphic representation of Yakni i Chukash. Dr. Thompson is Choctaw Tribal Archeologist, Tribal Historic Preservation Officer, and a NAGPRA Specialist.