Maybe it has something to do with traveling super-highways. Or maybe it has to do with science, or with the education system, or perhaps the way politicians hold public agencies accountable. But whatever the reason, people in Western culture very often expect progress in a collaborative project to be arithmetic. That is, they expect to travel from the starting point to the goal on a road that makes steady and regular progress that’s linear. You can see that line labeled “arithmetic” on the graph with two different lines on it, here. 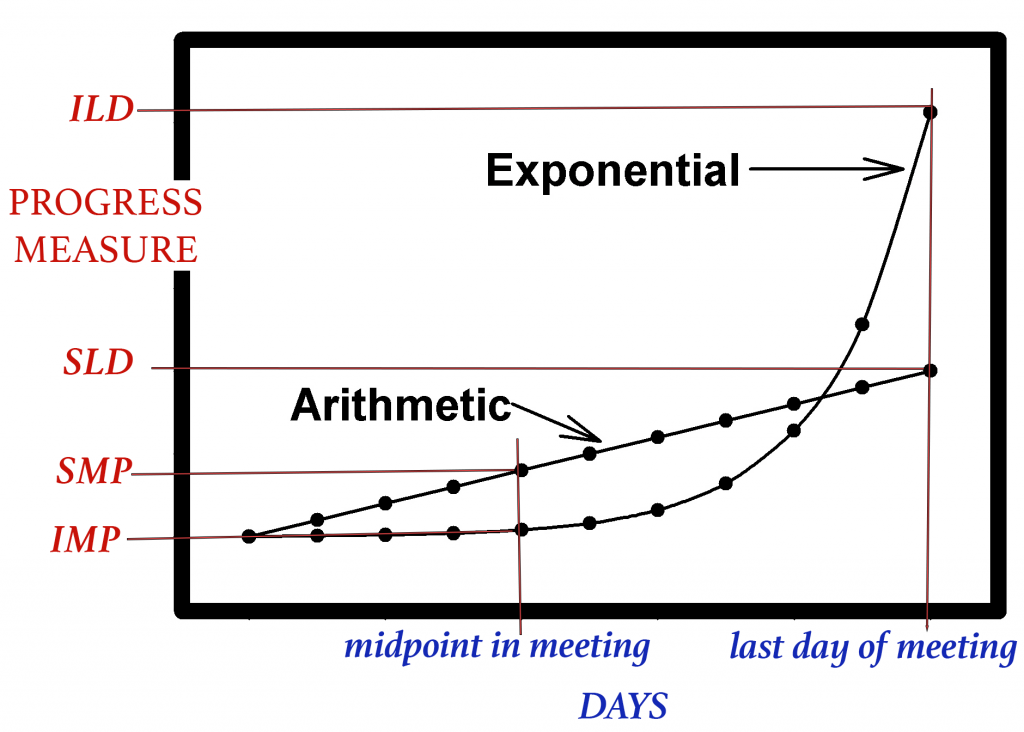 If a meeting moves on an arithmetic trajectory, then about halfway through the meeting, the group will be about halfway to the goal they want to accomplish.  So, on the graph above, you can see that the “progress measure” for SLD (Standard — or Modern or Western or contemporary, however you want to say it — Last Day) is about twice what it is on “SMP” (Standard MidPoint).

Indigenous processes tend to more commonly move along an exponential trajectory. You can see an exponential curve on the same diagram, for easy comparison. Notice that it starts off going apparently much slower, and it takes a long time to pick up speed and make visible upward progress. But once it gets going, then it accomplishes much more. So at that midpoint day in the meeting, the IMP (Indigenous MidPoint) of some progress measure is a lot lower than the same measure in a Standard type of meeting that is arithmetic. But look what happens by the last day of the meeting! ILD (Indigenous Last Day) is more than twice as high on the progress measure (however you do that) than is SLD (Standard Last Day).

The point is that if you worry too much about hitting incremental targets that will “get you to your goal in time,” you force the process into an arithmetic curve that actually winds up crippling the process itself.

Why are the processes different? That is, why do Indigenous meetings tend to follow a more exponential curve, rather than an arithmetic one?

Natural patterns of growth — meaning, patterns of growth in animals, plants, and other living things — actually tend to be exponential. Some of this has to do with the complexity. That’s because natural systems are actually complex systems. Indigenous people tend to be deeply connected to the Land and to natural processes. So our cultural and community processes tend to manifest the same exponential features seen in all complex natural systems.

If that seems too hypothetical or esoteric, think of it this way: People in our meeting are looking for patterns. The process that’s happening is one based on perception, not on logic or step-wise reasoning. The processes being used are more similar to puzzle-solving than to, say, a standard committee breakdown of tasks into discrete units with well-defined endpoints. You’ve experienced this kind of perception-based exponential curve yourself, whenever you’ve stared for a long time at something you can’t quite perceive, trying to make sense of it. It might have been one of those “magic eye” puzzles, or an optical illusion, or a strange pattern of lights in the sky, or something dark moving in the woods behind your house. But whatever it was, if you remember it along a timeline, you know there was a very long time you stared that you had no idea what you were looking at — and then all of a sudden, right at the end, perception hit and you went, “Aha!” That’s the little steep upward part of the curve there, at the end of an exponential curve. (And yes, perception is actually also a complex process. So this example is not a metaphor. Likewise, it is not metaphor to say that Indigenous processes manifest the exponential curves common in complex systems.)

When Indigenous people are working together on something creative and Land-based, they are trying to perceive patterns from which Knowledge will emerge. Sometimes that requires long periods of quiet contemplation. Sometimes it requires going for a walk to see other natural patterns that will add information to the system and increase the connections. Sometimes it requires doing ceremony to open your eyes to the pattern you can’t quite discern. None of this can be hastened or improved by grabbing the reins to “move things along” so that the group hits targets based on an arithmetic process curve.

So please. Don’t grab the reins if you start to worry we’re not making progress. Look at the graph instead, and change the way you think about what “progress” really is.

Click here to return to Signposts to Watch For.

Or use this Menu to visit previous pages:
How We Work
Learning in Community
Mindful Awareness
The One Big Rule
Traveling a Different Path