The family set up a guard system so they could protect the Land where they were. The loggers tried to come in by cutting fences and sending in men with chain saws. They tried to push down the fence with a bulldozer that had driven through their neighbor’s land to get to theirs. They tried to get the sheriff to arrest the whole family so they could enforce their rule — but the sheriff told the loggers that he might lose the next sheriff election, but he wasn’t going to arrest a whole family to enforce a ruling he wasn’t even sure was right. So the loggers just kept trying to enforce their ruling themselves. Again and again the children on watch would run to the houses, calling out the alarm. Again and again the family would run to the place the loggers were trying to take the trees, and get in their way. 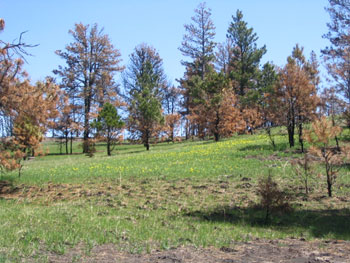 And again and again, the only thing that stopped them was the old grandmother. It took her longer and longer to get there each time though. She was getting a deep weariness from the stress of it all, though her eyes were bright with the joy of the healing they could all feel moving through the Land after the fire. That joy made her, and all of them, even more determined to protect the land. As the singed trees began to heal and they could start to see the pattern of a healthier forest materializing, and as wildflowers and grasses of many kinds — some that hadn’t been seen in decades — grew up out of the crusty black ground, their hearts rose with real hope for the future. They began to find joy in defending their boundaries from the people who were trying to push Western culture’s values onto them. “Not this time!” they would cry, fierce and joyful, as they ran to the newest place of conflict. But it was still a taxing situation, and it was hardest of all on the old grandmother. So the family bought a little machine the grandsons called a quad and they showed her how to sit on it with her arms tight around the waist of her high-school grandson, and it became his special job to get his grandmother safely and quickly to whatever place the logging men tried to get in to harm their healing land.

It was hard. It was wonderful and it was brave and it was the right thing to do. But it was very, very hard.

“One year,” they began to say to one another. The professor had told the college granddaughter that after one year, the burned wood wasn’t worth money anymore for some reason. If they could keep the logging men from cutting their trees for one year, they would give up and go away. “One year,” they said as they ran now. “Not this time” turned into “one year” because they were getting weary. They got to the place the logging men were, and there was pushing and shoving and sometimes punches were thrown. Two times the loggers brought hired men in dark sunglasses who had big dogs on tight leashes. The kids recorded everything on their cell phones, standing back where it was safe, in places the adults showed them to be. “It is your job to live on,” they instructed the young ones. “If things go bad, you owe it to our family to run home as fast as you can. Put the movies on the news but get safe first.”

And at just about that point, every time, the people facing off over the fence would suddenly hear the high whine of the quad’s engine. Then high-school grandson would burst into view with his hands gripping the quad’s handles, his long black hair standing straight up on the wind. The tiny figure of the old grandmother would peel itself from his back and willing hands would reach out to help her get off the machine and stand up, hand her the cane she always dropped at that moment, and help her to the line where people had just been pushing and shoving each other. A row of her grandchildren’s cellphones reflected the sunlight as the old woman planted her cane in the ground and leaned heavily on its head through both gnarled hands.

“You again!” the loggers would say.

And the grandmother would say, “Yes. Me again. And I tell you again: Get off our land. You are not going to take it this time. We have filed in the courts to stop you, and you know it. You will not bully us in the meantime. Get out.”

“We can drive to that hill over there and push down the fence,” the logging men would tell her. “We will get what we want. When will you learn?”

And she would answer them, “My grandson will get me to that place before you can get there. I will be waiting for you. I will not let you in. It is not money that matters. It is not what you think is tidy that matters. The only thing that matters is the Land itself. Hear me and learn that which can save your lives: The Land and everything else will keep on living if I die. But if the Land dies, not one of us lives — including you. If the Land dies, money does not matter, ‘tidy and neat’ does not matter. The fire is trying to keep the Land from dying, and it is the Land’s life that matters most. When will you learn?”

Note: The photographs on this page are by Jo Belasco, of Tapestry Institute land that burned in 2006.