As the long year wore on, the grandmother grew somehow smaller. She had never been large, but now she was frail. Her grandson began to put her in front of him on the quad, and to hold onto her as if she were a child. He feared she would fall off the back on a bump if she sat behind him any more. Her college granddaughter, who had stayed home from her studies for this terrible year of war, always stood behind her grandmother as she faced the loggers, and put her hands beneath her arms to catch her if she might suddenly fall. The whole family understood that the spirits and the Land itself were giving the grandmother a power the logging men and the neighbors could feel. These men were afraid of far more than just the videos the younger kids 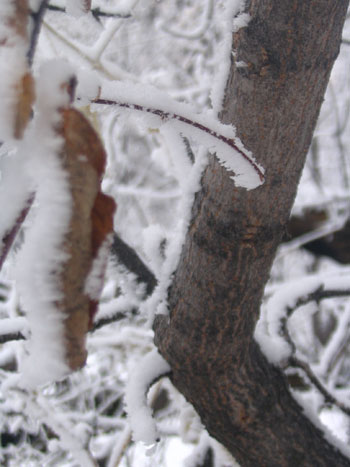 were making. They were afraid of something they didn’t quite understand, which made them even more wary of the old woman than they’d have otherwise been. They called her bad names to one another in town, and said cruel jokes about her that made them laugh in ugly ways. The settler women who heard these things told their husbands, “Don’t sell any more of our timber to them. Just . . . don’t. I don’t want them here.”

Fall passed, and then winter. Through snow and ice and then the cold spring rains, the high-school grandson got his grandmother to the battle, wherever the logging men brought it as they tried to take control of land that was not theirs. Sometimes in the evening a daughter would sigh and say, “I wish the news would hear about what’s going on. People would stop it.” Then the grandmother would shake her head and say, “No, it’s good that we’re too small a place for people to care about. If everyone knew, the war would only get bigger. And when the war gets bigger, the settlers always win. Even when lots of them are on our side, it’s the side that’s greedy that wins in the end. Let the Land win it this time. It’s only for a year. If we can keep them from winning for one year, the Land will be free to live and to heal. They won’t be able to stop it any more. That’s what matters, is the Land.”

Summer came again, and with it a carpet of yellow sunflowers that delighted the old grandmother beyond measure. Mind you, there had been wildflowers all along — even at times their presence seemed unlikely. The Fire Knowledge Elder had come and walked the college granddaughter through the burned land many times during the year, teaching her about the plants coming up in a rare succession that brought very valuable Knowledge. Many of these plants had tiny wildflowers of pink, blue, or white. But the plants themselves were mostly small and dark, restrained in character. But when the wild sunflowers began to wave bright blossoms from summer grass thicker and richer than anyone could ever remember seeing, everything changed.

There was only one month left in the war year they had to get through, one more month they would have to resist the loggers. It was nearly over. The loggers themselves seemed to have tired of the war. They came to the fence only rarely now, and they sometimes simply gave up and left the moment they heard the high whine of the grandmother’s quad coming. But the cheerful wild sunflowers dancing on the summer wind brought a different feeling, one no one had had in a very long time. The hills were still covered with black trees — but the green ones among them suddenly looked healthier, more robust. Some of the trees that had been so badly singed they had seemed dead were covered with bright new growth. So the family spread a feast on the new picnic tables, setting them up in a field of sunflowers when the day came to celebrate the grandmother’s 89th birthday. They had just sat down to eat when they saw a truck come through the gate. The oldest husband stood up and shaded his eyes.

“It’s the sheriff,” he said. He went to meet him. They came to the table together, both of them smiling. The sheriff had come to tell them the logging company had packed up and left. There had been a big fire two states over, and they had moved their operations there. The war was over a whole month early. Everyone cheered. What a wonderful birthday present for the grandmother! The sheriff sat down and had feast with them, and they had a wonderful afternoon.

The college granddaughter gave the best birthday present of all though. She had been receiving Fire Knowledge from the Elder all year. Now she announced to the family that he had given permission that, when she went back to college in the fall, she could integrate that Fire Knowledge with the wildfire ecology knowledge of her professors to create a more powerful understanding of wildfire. She had already talked to the professor who’d come to visit them, and he was going to help her put the Fire Knowledge into a research project. Together, they would learn things that would be useful to other people working to help their forests heal after fire. Everyone was very pleased with this, the old grandmother most of all.

The old grandmother sent her middle grandson into the house to get the book with the picture her old fire-wars uncle had shown her. Everyone gathered close as she showed them the picture and told what her uncle had said — about how the forest had once been, and that he’d been a warrior who fought the fires until the day he suddenly understood it was wrong. She told them how he cried when he realized what he had done without meaning to, and what serious trouble the forests were in. The sheriff said, “Well that is the difference, right there. When the loggers see they have done something wrong, it makes them mad. When your uncle saw he had done wrong, he was sorry.”

“You know,” said oldest daughter to the sheriff, “You have to be brave to face unpleasant things and feel sad instead of defensive. It’s not those men’s fault no one ever taught them how to be brave.”

“They think it’s only superheroes who are brave, not regular people!” piped up the littlest grandson. He was about to start second grade. Everyone laughed.

The afternoon of that birthday celebration was wonderful, and everyone remembered it for the rest of their lives. For that night, when the Milky Way hung suspended over the valley, the old grandmother walked the Star Road and went home to her people. High-school grandson saw her in a dream that woke him at 2 in the morning. She was so young he wouldn’t have recognized her but for the look in her eyes. She was running to meet a tall man coming across a field of sunflowers, his arms held out in welcome. Later the next day, his mother showed him an old photo album, and he found a picture of the man he had seen. You know who it was, though he’s never been mentioned here. How else do you think there were three daughters?

Go to the last part of the Story, part 9.