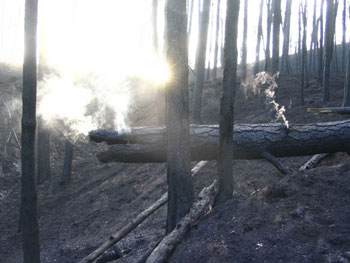 After the fire was over, the people of the hills and valleys and mountain all went back to their homes or the places their homes had once stood. The grandmother’s family came home to find their homes standing like islands in a sea of blackened ground. The only other island in that black sea was a large patch of emerald green — their garden. “Maybe the firefighters knew we needed that food,” said the third daughter. But they asked the men they knew who had been fighting the fire there, and they said no. They said they had even had to run away from the flames and leave the houses to burn, and they thought sure all the buildings had been lost. So many were, all over the area. So there was no way they’d have tried to protect someone’s garden. Third daughter said the man who told her all this “looked at me like I was nuts.” Then, she went on, he narrowed his eyes and observed that “some people in town wondered how it was their buildings had all come through the fire without being burned up.” The family was just sitting down for supper together on the living room floor of the biggest house when she told them this part — the picnic tables hadn’t been as lucky as the houses and garden had been — and they all laughed when this daughter showed them how the man had screwed up his expression when he said that to her. She was a very good mimic. It was good to be home and laughing again, even with all the slopes and the whole valley black as coal and smelling like a wet fireplace. 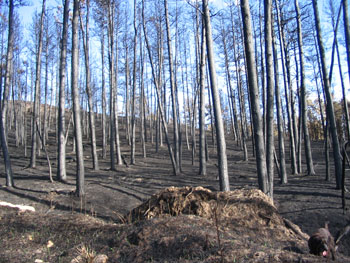 “Imagine the grass that’s gonna’ come up!” they kept saying to each other when they felt sad. An Elder with some good Fire Knowledge had come to the house where they’d been staying while evacuated, and he had come specifically to tell them things they needed to know in order to help the Land finish its healing. One of those things was about all the small plants that would spring up within weeks, that would break the hard crust created by the fire’s heat so water and air could get into the ground again and start the process of rebirth. He had shared a lot of Fire Knowledge he carried. In fact, it was his father who had carried Fire Knowledge that had gotten shared with the firefighter uncle. So the family knew what to do and not do. They knew how to behave to help the Land finish healing itself with the fire. 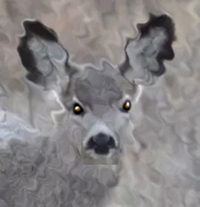 But that night, the old grandmother could not sleep. She saw in her memory, again and again, the doe that had come to her in Dream. Again and again she saw the sentient wisdom in that Deer’s eyes. She saw the fear that had made her ears swivel as she raised a forehoof to strike the hose from the old woman’s hands — the hose that represented human resistance to the fire. Why had that Deer been afraid? It had not been afraid of her, of that she was certain. But there had been real fear and distress there. She looked into the doe’s dark eyes as she lay in the dark, the vision returning to visit her as she opened her heart to it. Laying there, she opened her heart wider and then wider still so she could hear the wisdom that deer had brought her, that the Deer Nation knew and had been trying to share. And then, like hot water rising in a bathtub, she felt the Knowledge envelop her. She closed her eyes then, and slept.

The next day she called her family together. “There was Knowledge brought to me in the Dream-Vision that was given me about the fire,” she explained. And then she told them what the Deer Nation knew and had told her: their people were ill and dying, and the only way to health was for the forest itself to be healthy once more. Two of the grandsons said at once that, yes, the deer were ill and dying. The settlers called it Chronic Wasting Disease, and they didn’t know how it had started. But now it was spreading everywhere. Some people were saying the people who ate sick deer could get sick as well. There were some hunters who it was said might have died from it. And it was spreading to elk and other animals too now.

“Well, this disease has come from the sickness in the Land,” said the grandmother. “That is what the Deer was telling me, that I did not understand at first. That’s why she was so distressed that I was going to fight the fire. The Deer Nation will die if the forest does not heal.”

Everyone was quiet for a time. Then they went about their work, remaining silent, thinking and feeling into the wisdom that was rising from the ground all around them. They began to talk in low voices to their relatives, on the reservation and off. The phones were very busy for things other than taking pictures. Two Elders came to visit them, traveling all the way to their burned and blackened valley. Several grandchildren who looked things up on the internet found out that other people had been receiving Knowledge about the Deer dying too, that it was happening because people wouldn’t let the forests burn anymore. Slowly the pieces of understanding began to fall into place. It wasn’t just the deer that had become sick in recent years. Mountain lions were getting a mysterious disease, too. The wild and tame birds — even the eagles — were getting sick and dying of a flu virus. And for several years recently a lot of people had gotten sick — and many had died — from a coronavirus that swept cities and reservations like a flood.

On the fourth day since they had come home after the fire, they sat down around the biggest room in chairs and on the floor, children sitting quiet and attentive in every nook and cranny, listening, their phones nowhere to be seen, and they talked.

Note: The burn photos at the top of this page are by Jo Belasco, of Tapestry Institute property that burned in 2006.