The professor and the granddaughter made her pictures of the burn patterns into slides. They gave a program at the school. They showed people that not all the trees in every place had burned. In some places, the fire had burned out big areas but left clumps of trees standing green and healthy in between them. The singed trees around those clumps were damaged, and some would die while others would heal. It would take time to find out which would live. In other places, the fire had burned through and picked this tree or that one to take, leaving others unburned. Both type of burns had the effect of thinning out the trees that were too thick. The ones that remained would have less competition for water and nutrients. And the ones that had died would rot and put nutrients back into the depleted soil that would make the remaining trees grow well.

The professor even put up a slide that told a story from his own culture. He reminded the people who came that some of their ancestors knew a story about a bird that built a great nest periodically, then died in flames as the nest burned up in a fire. But after the fire, a new bird rose from the ashes of the burned nest and the burned bird. The professor said some people called the bird a phoenix, but that others called it a firebird. He played music someone had written that told this ancient story. He told the people that the fire that had come to their forests was the firebird or phoenix story living itself out. He said that if they cut the dead wood and hauled it away because they thought it was ugly or because they wanted the money, that was the same as if people in the firebird story swept up and hauled away the ashes and burned wood of the firebird’s nest and body. Once they hauled it all off, the firebird could never come back. It was not the fire that was destructive, but the cleaning it up afterwards. Let the forest grow back, he pleaded. Pay attention to the wisdom in our very own stories.

Only seven people came to that lecture. One of them was a man from the logging company who made a point of laughing derisively at the things the professor said. When he got up to leave, he said very loudly, “Now we’re going to listen to a myth, over science?”

“I am the one who’s a scientist,” said the professor. “Not you.”

The people left, and no one changed their minds. The professor went back home. The logging continued. And the neighbor went to the court and somehow got an order issued that the logging had to come onto the grandmother’s family’s land to protect the neighbors from an eyesore and a danger to the community. At this, the oldest daughter’s husband was so angry that for a time everyone feared for his health. He went all the way to a big city to get a lawyer. When he finally found one who would talk to him, the lawyer said this ruling could happen because the community was small. It was a wrong thing, and the ruling could be overturned. But it would take time. By the time it was overturned, the trees would be gone. The husband came home looking like the grandfathers long ago who had gone to the big war.

The family held a council such as the grandmother had not seen since those days. They understood now what they were up against. But Deer had brought the Knowledge in the grandmother’s Dream for a reason. Then Knowledge had come to them all, through the Elders and the professor and in many other ways. They knew what they had to do.

So when the logging trucks showed up at their gate, the men went out to stand in their way. The loggers pushed them aside, but the men came back into the road. The loggers pushed them aside more forcefully. The women came out to stand with their men. The loggers were uncomfortable at first about pushing aside the women. But they did it. And they fired up their equipment to threaten to drive over them. The children began to get up to go out, but their grandmother said no. She took her cane. She went out the door. 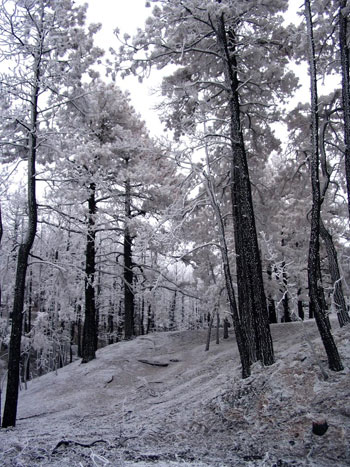 She looked up at the sun, and she prayed. She raised her face into the wind, and it lifted her hair in a gentle blessing. And then she walked down the dirt drive to the gate where everyone was tensely facing one another. The logging men watched her warily. When she got there, she set the base of her cane upon the ground with a heavy thump. “I am not moving,” she said. “You can only come on this land if you drive over me. I am 88 years old.” She turned to her third daughter. “Turn on your cell phone camera if they go to drive over me,” she said, “and make a picture of it. Send it to the news and put it on the places people put those things. Let everyone know these men drove their trucks over an old woman and killed her just because they were so greedy that the timber on the thousands of acres all around us was not enough to satisfy them.” Then she grew as firm and as hard and as rooted as the great stone that stood tall on the hillside behind her. And she looked the logging men in their eyes.

Everyone was silent for a while. Then the logging men got in their trucks and left. The younger members of the family started to cheer and smile, but the older ones shook their heads. The old  grandmother explained, “This is not over. You must remember how highly these people value money. They will be back.”