When we moved to the canyon, we knew the forest was overgrown. It had many dog-hair thickets – trees growing so close together that they become very thin and tall. The thickets were created by logging done over the years and from overgrazing by cattle. We knew we would have to thin the forest, but with 1300 acres to thin, we knew it would take awhile to do it. After the catastrophic fire, the dog-hair thickets were just charred sticks. Nature had done in one day what it would have taken us months, even years, to do.

Many people misunderstand what fuels a fire. Because we did not allow cattle grazing on the ranch, some people warned us that if we had a fire, it would be worse than those places that did allow grazing. That simply wasn’t true. The worst burn areas happened where the dog-hair thickets existed, as shown by the pictures in this post. While the grass did burn, it was these trees that created the huge fuel load that carried the catastrophic fire.

Here are examples of more dog-hair thickets that burned in the fire: 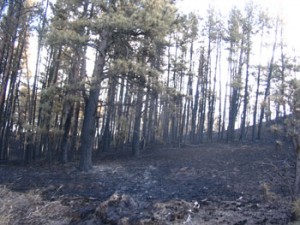 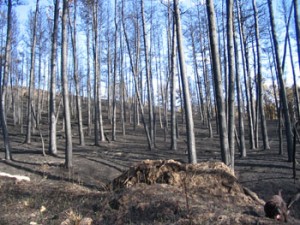 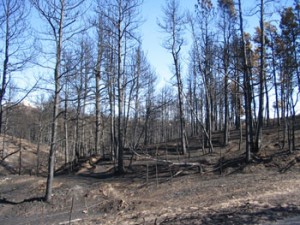 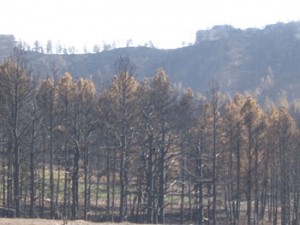 The following images show how the fire spread when trees ignited and were close together. Compare the height of those flames and their intensity to the picture of the flames in the grass. You’ll also note the trees in the picture with the grass on fire are larger and farther spaced apart. Those trees are more fire resistant, and even if one does catch on fire, the spacing between trees lessons the chances that others will catch fire. The last picture in this series shows why stopping a fire involving dog-hair thickets is almost impossible – there are simply too many trees too close together. 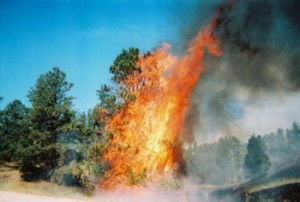 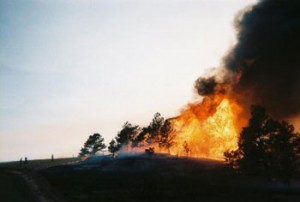 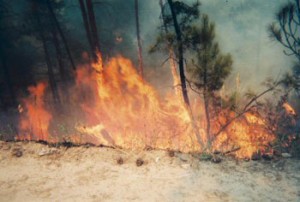 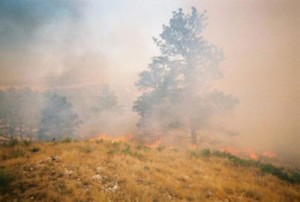 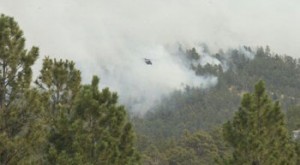 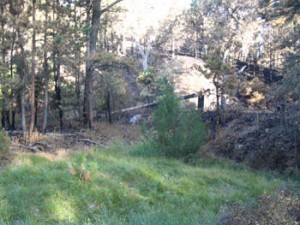 We had plenty of grass in areas without these thickets and those areas did not burn or did not burn as badly. Unfortunately, I didn’t get a picture of one such lush area. The grass was knee-to-waist high, green and golden, and untouched by fire, along with several cottonwood trees, while the area around it was severely burned because of the thickets. The area below was another lush area, void of dog-hair thickets, and untouched by fire.