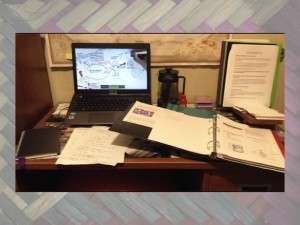 Indigenous Knowledge that refers to a body of information, especially about facets of the natural environment, is commonly called Traditional Ecological Knowledge (TEK). Knowing when it is the right time to hunt a certain type of migratory animal based on the seasonal appearance of a particular plant is a type of TEK. Western scientists see TEK as the product of primarily Western-science-type processes of observation, deduction, and inference that have been carried out by Indigenous people to acquire this knowledge. However, TEK is called Traditional Ecological Knowledge because it has been passed down for generations — and it’s important to realize that most Indigenous communities record stories about the event in which such Knowledge was first shared with humans by the Land or by Knowledge itself (in the sense of the third way the term is used). It is inappropriate for Western scientists to project their own methods and theories of learning onto Indigenous communities and, in the process, to rewrite Indigenous communities’ own accounts of how they acquired TEK. If we accept the communities’ accounts of how it came into existence, TEK is IK in all three of the ways we are using the term.

Scholars such as anthropologists, who study humans rather than the natural environment,  record and study the parts of IK that are songs and rituals. But they study these things as cultural customs or traditions rather than as “knowledge”. As a result, information that’s been tagged as TEK is often separated from the spiritual and other types of information that are supposed to go with it. When this happens, we say such environmental knowledge has been decontextualized. Decontextualization of knowledge concerns Indigenous people because the larger context of story, ritual, and other types of information that “go with” a piece of ecological or herbal knowledge tell people things such as how to maintain the relationship involved so it continues to be healthy, what rules or restrictions apply to using the information so that it can continue to be used safely, and what consequences there may be for using the information improperly.  Decontextualized information is a little like a powerful and complicated electronic tool for which the instruction booklet has been thrown away unread. So although many Indigenous people have taken to using the term TEK, they are wary of the decontextualization of information that happens when such information is collected by Western scientists.

Some Indigenous scholars and, interestingly, some Western scholars consider TEK as equivalent to or even identical with Indigenous Science. These two sets of scholars see the epistemic processes of TEK very differently however.