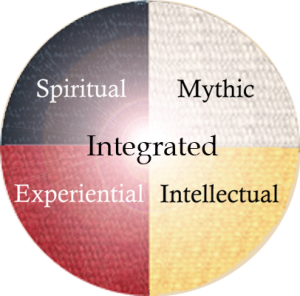 If it seems to you like all the ways of knowing must be intellectual because they are “done by the brain”, you are looking at humans through a particularly Western lens that sees systems as being controlled by a hierarchical pyramid of authority in which the single power at the top — president of a corporation, brain of a body, or nucleus of a cell — ultimately controls all the sublevels. There is a tight connection between knowing and control in this world view, expressed by the adage “knowledge is power.” Science fiction stories in which human beings are bodiless brains, or in which brain transplants move an entire personality into a body that serves merely as a housing for the brain, are mythic expressions of this worldview.

The very fact that the writers of such science fiction may be consciously unaware of the myth they’re expressing demonstrates that this way of knowing occurs at some other level. You might argue that intuition and the subconscious reside in the neural tissues of the brain, but that still does not explain the visceral power of story. As Arthur Frank writes in “The Wounded Storyteller (p. 23, italics added), “To think about a story is to reduce it to content and then analyze that content. Thinking with stories takes the story as already complete; there is no going beyond it. To think with a story is to experience it affecting one’s own life and to find in that effect a certain truth of one’s life.” Sometimes those truths simply seep into us in ways we cannot even pinpoint, much less process intellectually.

Western science is often seen as definitive of “real” knowing, and certainly as the epitome of intellectual knowing. However, such a view ignores science’s long-standing reliance on experiential data collected by the body’s senses as its starting point. Some of the quotes by famous scientists on this and several other pages show you that there are mythic and even spiritual components of scientific knowing as well. It is the integration of all the ways of knowing about a thing that seems to give the truly great scientists their power of understanding. So, too, for all of us.

To proceed all the way back around the Circle of Ways of Knowing, visit Intellectual Ways of Learning and Knowing.

To proceed back around the Circle to the initial direction, visit East.