A paradigm shift is a change in our perception of reality. Perception, itself, is a complex neurological process, in the sense that self-organization produces the emergence of a wholly new order or “thing” — perception — from the brain’s connected and interacting neurons.

Perception is about more than merely “seeing a thing.” It’s a higher-order phenomenon in which the brain processes a pattern of lines or shapes into real understanding of what those patterns represent. We can recognize a shape even if the image is incomplete, stylized, or abstract because of the cognitive process of perception. Further, it is perception that permits us to understand the context and consequence of what we’re seeing. That’s why a paradigm shift is about perception, not merely sight. In fact, perception (obviously) occurs in people who are unsighted. A visual stimulus is simply one of may kinds of stimuli that can trigger the process of perception. We routinely use information from multiple senses to help us perceive an unusual thing we don’t quite understand yet. That’s why so often we want to touch something, not just see it with our eyes. 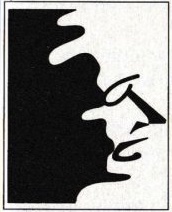 The late cognitive scientist Francisco Varela defined the neural process that produces perception in the brain as the “perception condition.” Because Varela’s ground-breaking work isn’t well-known outside the field of neurobiology, it’s important you know the caliber of his credentials. He was Director of Research at CNRS, Paris; Fondation de France Professor of Cognitive Science and Epistemology at Ecole Polytecnique; and head of the Neurodynamics Unit at the Salpetrière Hospital, Paris. In one of his most famous studies, Varela gave people in an experiment the image you see to the right. Take a look at that picture, give it a moment, and you will realize what you’re seeing. Then scroll down past the “spoiler space” I’ve inserted to find out what happened in your own brain when you experienced the perception condition that permitted you to understand what you were seeing here.

Did you perceive a woman’s face looking to your right? She has a fairly sharp nose and her forehead, cheeks, and chin are bathed in bright light. Varela gave this pictures and others like it to test subjects who had EEG electrodes attached to their scalps. He told the participants to look at the image and push a button the moment they realized what they were looking at. The electrodes on their scalps recorded the locations of electrical neurological activity in their brains as they processed the image into a moment of perception. 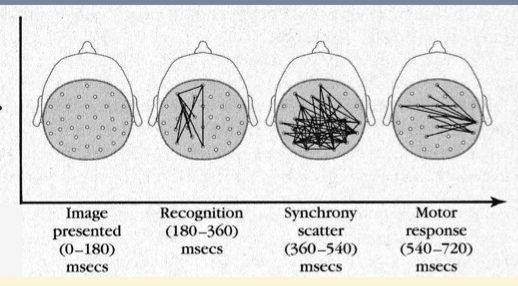 Phases of electrical activity in brain neurons during the process of perception. From Goleman 2004, based on Varela 2001.

Neuro-electrical activity at the moment of perception — the moment shown in the third image from the left here —  turned out to be unexpectedly whole-brain. The drawing shows electrical activity between neurons in the brains of test subjects.  Each line shows an electrical charge moving through connections between neurons as they communicate with one another by passing along an electrical impulse. The image farthest left shows no electrical firing between neurons at the beginning of the experiment, when the test subject first saw the image. (The little circles on the head are the EEG electrodes on the scalp.) In the second drawing, we can see that a few neurons are sending electrical impulses through their connections to each other as the person begins to recognize what the image might be a picture of. In the third drawing, the person looking at the picture reported having the “aha!” moment of perception. They suddenly understood what they were seeing. At that point, electrical impulses fired along the connections between neurons all over the brain, simultaneously — seemingly “scattered” across the entire brain rather than in a single area. Finally, in the image on the farthest right, a different and once again smaller group of neurons showed electrical activity between them as the person prepared to move their finger to push the button to signal they had recognized the image. The entire sequence was very rapid, taking generally around a half a second.

That third stage of activity, when the person experienced the “aha!” moment of perception, is the really important one. That’s the moment when the person suddenly experienced perception. Varela called this phase of the brain’s activity synchrony because many neurons all over the brain suddenly fired together, at the very same time (Goleman 2004, Varela et al 2001). This is a beautiful example of what we mean when we say complex systems such as the brain are non-linear. There is no A-to-B-to-C-to-D sequence of electrical impulse firing between the neurons as the person looks at the picure and then perceives what it is. Perception is, instead, a complex “whole-system” process in which rapidly multiplying connections between neurons generate a emergence of the higher order “aha” experience of perception. Here are the words Varela himself used to explain what happens during the process of perception:

“When we perform a cognitive act – for example, we have a visual perception – the perception is not the simple fact of an image in the retina. There are many, many sites in the brain that come active. The big problem… is how these many, many active parts become coherent to form a unity. . . How does that happen? Imagine that each one of the sites in the brain is like a musical note. It has a tone. Why a tone? Empirically, there is an oscillation. [Notice the term ’empirically.’ Varela means the oscillation is actual, not a metaphor. — DHA] The neurons in the brain oscillate all over the place . . . different places in the brain oscillate, and these become harmonized. When you have a wave here and another there, from different parts of the brain, several become synchronized, so they oscillate together. When the brain sets into a pattern – to have a perception, or to make a movement – the phase of these oscillations becomes harmonized, what we call phase-locked. The waves oscillate together in synchrony. . . . Many patterns of oscillation in the brain spontaneously select each other to create melody, that is, the moment of experience” (Goleman 2004, quoting personal communication with Varela).

We see here that the brain exhibits all the salient hallmarks of a natural complex system: a rich network of connections through which the parts of the system relate to and communicate with each other;  spontaneous self-organization to a higher level of order because of the communication along the internal system of connections; and emergence of a completely new phenomenon that has characteristics not present in the lower levels of the system that produced it.