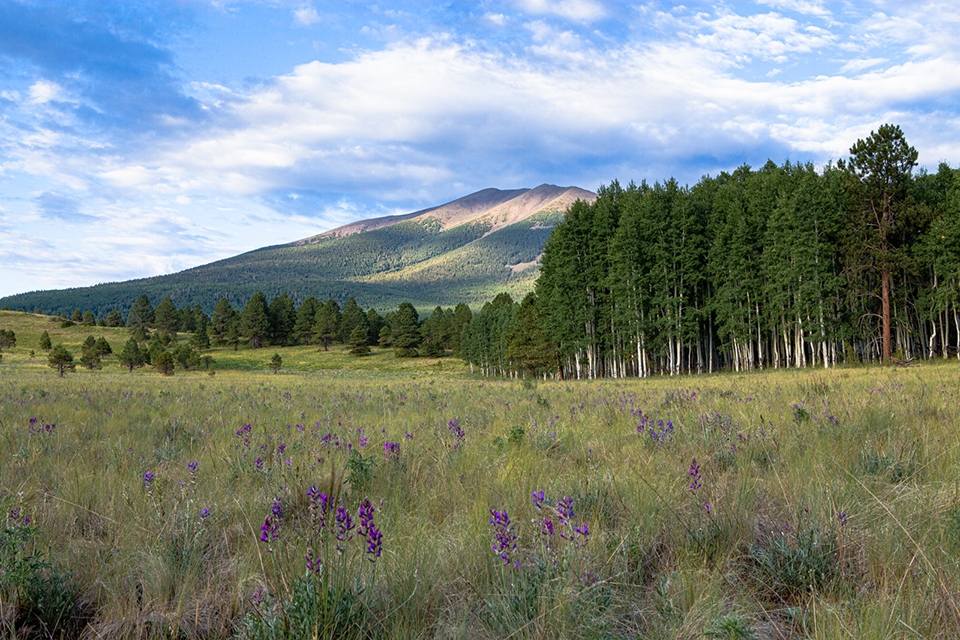 Clearings occur naturally in forests. The interface between clearing and forest is a zone of locally heightened species diversity called an edge. The type of large natural clearing shown in the photograph to the right appears in aspen and Ponderosa pine forests on and around the San Francisco Peaks (the mountain you can see in the picture) near Flagstaff, Arizona. Forest clearings are created by several different processes, including mosaic burns and storm blow-downs. Very large, highly stable clearings such as the one shown here, have existed for more than  a century, and we can no longer tell how they originally formed.

For more than 40 years, electric utility companies have stated that running powerline corridors through previously undisturbed forests benefits the environment because the clearings created by the corridors generate an edge effect. Ecologists have, in response, tried to document species diversity edge effects along powerline corridors running through forests (1, 2, 3. These linked papers permit you to see examples of this type of research. As you work through this part of the exercise, you may wish to skim one or two of the abstracts to get a better understanding of the ways “the issue of powerline edge effects” is being addressed in Western culture. But there is no expectation or desire that you download or read the papers linked, which is why they are not listed as actual references.) The utility company’s reasoning is that forest clearings formed by power line corridors and forest clearings formed by storm blow-downs are structurally the same thing and therefore have the same beneficial edge effect on the forest ecosystems involved.

My guess is that as you look at the photograph of the powerline in a cleared corridor through a forest in Great Britain, you feel an instinctive resistance to the idea that this situation is the same as that in the clearing near the San Francisco Peaks in the photo above that one. But the clearing you saw first is a very old one, whereas the one with the powerline in it is fairly new. How does the comparison look if the natural clearing is a fresh disturbance? To the right you can see a picture of a tornado blow-down near Southbridge, Massachusetts in 2011. There’s a picture of another blow-down, from a different type of storm (not a tornado) in part of NSF’s Harvard Forest in 1990, below. Look at all four images for a moment — the one near the mountain in Arizona, the one with the powerline, and the two created by storms. These might feel different enough to stir up some new thoughts and emotions.

Somewhere inside you, doesn’t it seem actually necessary to clean up that storm damage a bit? Did you think things along these lines? “How can people and animals get through that chaos of splintered and jumbled trees? What will it be like when new plants grow up through it all? And if fire were to break out there, no one could even get in to put it out. After all, both storm sites are very close to urban areas. If you were to go in and clean up the broken and fallen timber, and haul it out so people could get through, then wouldn’t these clearings created by storm blow-down look just like the corridor with the power line running through it? Well, except for the power line itself of course. So maybe the trick here is to look at the powerline’s impact on species in a corridor. Those high-tension lines hum. So perhaps the difference between the two kinds of places is the power line’s electromagnetic current.”

Is this something along the lines of the thoughts and feelings you experienced as you looked at these images?

If so, you’re thinking along the same lines most people in Western culture are thinking. It’s a bit frustrating, isn’t it, to intuitively feel “something isn’t right here” but be unable to pinpoint any flaw in the logic. Ecologists are trying to document differences that could reveal the differences they sense exist too. And yes, some of them look at the electromagnetic fields around high-tension electrical lines as part of that. You can see in those abstracts I cited that no smoking gun has shown up in the results though. Meanwhile, more high-tension electrical transmission corridors are being planned to carry electricity from major solar and wind farm installations to urban areas.

Where does this leave us? More to the point, where does it leave you? Have you shrugged? “Oh well, there are more urgent things to pay attention to anyway.” Did you feel helpless or overwhelmed? “Yet another thing they’re doing that just can’t be right but they’re getting away with it — and where’s my antacid?” Did you feel reassured? “Well, trained people are looking at this and not finding big differences, and we need to switch to solar and wind power anyway — and the power certainly has to get from one place to the other.”

Whenever your intuition senses a problem that remains so elusive you’re left feeling like you have no choice but to walk away from the whole thing, there’s usually a very deeply-rooted paradigm blocking your attempt to resolve information that, if resolved, could potentially overturn that paradigm. It might not, of course. Remember that big paradigm shifts are rare. But the prospect is unsettling enough that we seldom stop to question things. Paradigm analysis and evaluation can release you from this kind of impasse. So that’s what we’re going to do together.

As we do, please remember that every case we’ll explore to figure this out exists in the landscape of West. It’s actually dangerous for us to shrug off an impasse in that quadrant, or to resign ourselves to the inevitable or self-medicate our hopeless anguish. When a tornado is on the ground, you need to know about it. And a tornado is particularly likely during a time when turbulence in the Land is so great that it’s manifesting within and between individuals, communities, societies, demographic groups, and countries. We face a serious situation that requires heightened awareness, not learned helplessness.

The clearing example is fairly simple and straightforward, so your intuition was probably able to sense a problem somewhere. Even if you couldn’t put your finger on what the problem was, that’s important. If you have that feeling, you can remember it and then learn to pay close attention to it. Situations that are bigger and more complicated are often harder to grasp intuitively, but the more we practice noticing this kind of thing, the more sensitive our intuitive ability becomes. We’ll be coming back to the clearing example and seeing that your intuition is trying to tell you something important about it. But the road to that understanding goes through a different disturbance in the quadrant of West: fire.

Please continue your process of integration and paradigmatic evaluation on the next page, which explores the impact of smoke from Tallgrass Prairie fires.