If you release Western culture’s linear, mechanistic cause-and-effect master paradigm of human-nature relationship, in what new landscape do you find yourself? Perhaps it’s one where you feel helpless and vulnerable. Because at the same time you’ve given up the tools you know won’t protect you (that it turns out never did), ice caps and glaciers are melting, sea levels are rising, wind and ocean circulation patterns are breaking down, storm severity is increasing, new pathogens are emerging from collapsing ecosystems, and even tectonic activities that produce volcanoes and earthquakes seem bent on ending “life as we know it”.

The first thing you need to see is that this scenario feels apocalyptic because of Western culture’s master paradigm. This paradigm inherently tells an apocalyptic story, so of course that’s what you perceive. Think about it: in the linear, one-way story of material flow through ecosystems, things simply evaporate at the end. That’s the  story told in the linear and circular economies diagrams we analyzed. And the stories told by linear, mechanistic cause-and-effect explanations of process and pattern in living systems, where things must “adapt or die” (meaning adapt or go extinct) are, in their fundamental essence, stories that end in apocalypse. Think back on the movies you’ve seen and the books you’ve read, and you can see Western culture’s fixation on the idea that things grow and grow and grow, then crash forever. This story has been being told for such a very long time that now academics debate the impact of the fears and hopes engendered by the constantly cycling periods of apocalypse expectation on the social and political structures of European communities. These days the sense of impending apocalyptic doom even impacts non-European communities worldwide, all of which have been colonized psychologically and mythically by European paradigms of reality.

In the face of all this I say: breathe.

Things are in a very dangerous state, it is true. But there is a way out. Apocalypse will only happen if you insist on riding your cultural paradigm over the cliff of self-fulfilling prophecy. And remember, it is fear that will tempt you to pick up that dangerous toolkit and try to “fix” things, which we know has never worked and never will work but will only put you back on that same runaway train. Expectation of apocalypse only exacerbates fear. So you see the dangerous potential here, for you to weave the very story you most fear into the fabric of reality. So, again: breathe. You have more power than you think you do, but different in nature and scope than you think it is. Your real power resides in the way you perceive the natural world and your place within it. The paradigm shift you’ve been sensing all this time, that brought you to these pages to begin with, is actually the thing that can turn the tide of history back into channels of life rather than death.

But what IS the new paradigm? We have seen it over and over, every time we’ve pointed to the salient features of the old one and then laid out nature’s own alternative. In our Weaving section the picture is drawn and then redrawn most dramatically in the diagrams of linear and circular economies, told and then retold in the story of wild horses and wild fire. Do you remember? Can you feel the essential elements?

Do you remember two key “drawing errors” I pointed out in the economies diagrams, that I suggested create a “selfie” picture of Western culture itself rather than of natural or real economic systems? The same two “errors” — with the same significance — are present in the diagram of pattern and process I shared in the last couple of pages. These “errors” are not errors at all within Western culture. They’re accurate expressions of Western culture’s master paradigm of human-nature relationship. But they are inaccurate expressions of reality. Here are the diagrams again, to remind you: 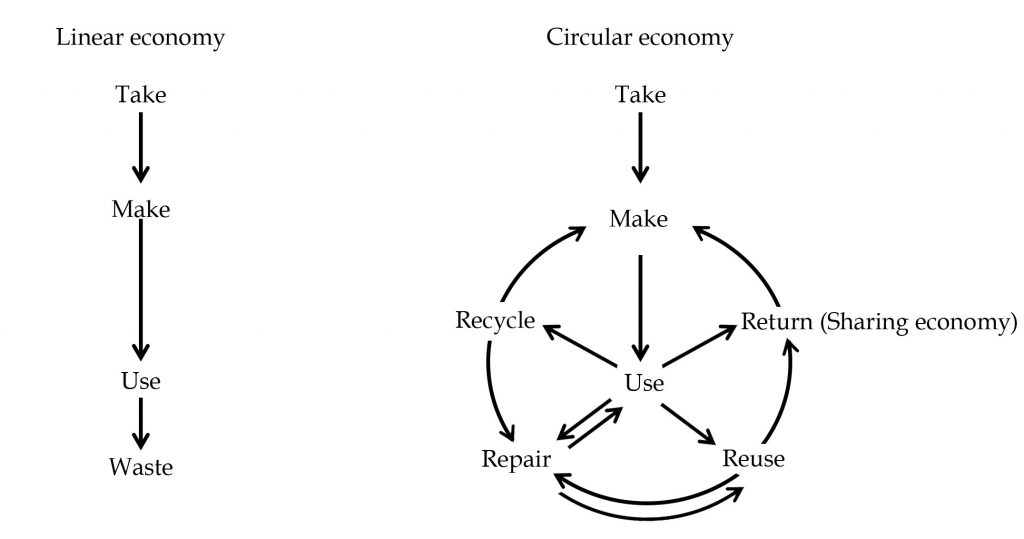 Humans are literally not visible in these diagrams. Only their disembodied actions are present: “take” and “make,” or the process of “burn” (as one example) in the pattern that is Flint Hills prairie. Can you see the hole where people ought to be? Humans are mysteriously invisible in these diagrams in precisely the same way the news crew and their helicopter is mysteriously invisible in the video of wild horses “fleeing” a grass fire. That’s what happens when you estrange yourself from the natural world. You become the hovering all-seeing non-living “objective observer” looking down on the distant world that’s completely unconnected to you.

It’s not really that way, of course. You are the one “taking” the rocks, plants, animals, water, and wind in the economies diagrams. You are the one setting some of the fires to prairies (lightning doing it at other times). You are the one clearing trees for powerline corridors and trucking in cattle to graze the prairie grass. Not only that, if you look at those diagrams again, you will see they’re so focused on universalized processes and patterns that even things such as animals, plants, rocks, waters, and winds are missing.

You saw the difference it makes to circular and linear economy diagrams to include humans and all the other elements as parts of the natural world. You saw the difference in understanding the tallgrass prairie that emerges when many representatives of the animal and plant nations to whom that Land is home, including the humans, are written into the process-pattern diagram of “burning produces a healthy prairie ecosystem”. I also pointed out to you the similarity between my figure of the inter-related nations of the tallgrass prairie and the redrawn circular economies diagram. That similarity exists because the changes I made to both diagrams turn Western culture’s paradigmatic view of the natural world and human separation from nature into representations of the real natural world with humans woven into it as one thread among many.

So this is #1: Humans are an integral part of the natural world. Human nations exist in relationship with animal and plant nations, waters, winds, and rocks that are relatives to us and to each other. These relatives want to be in healthy, rather than toxic, relationship with us. But people of Western culture don’t even know what this kind of healthy relationship looks or feels like any more. If this is who you are, then you  must be as a very young child again and prepare to learn a thing that will be very beautiful — and not at all what you expect.

What can happen is that the natural world heals. It heals the same way you do: through innate, natural processes of recovery facilitated by rest, if given sufficient time and a cessation of harmful acts.

How can the Land heal itself this way, if we simply stop harming it and give it time and space? It can heal because . . .

This is #2: The Land is alive. This is not metaphor. It is also not “merely one of many equally plausible pluralistic philosophies”. Does such a strong assertion surprise you? Remember there was a time when people of other races were not seen as human beings. Now we all understand that perception of our common humanity is not a matter of personal opinion but of wisdom. The same wisdom applies  to our perception of the Land as a living entity with agency. Nevertheless, I have learned, over the years, that many people in Western culture who hesitate to accept the Land’s living agency suggest it would accomplish the same thing to simply say humans must care for the earth as good stewards, to realize that we can’t take from it endlessly and without limit.

But do you remember the way I changed the one-way arrows on the linear and circular economies diagrams? Do you remember how I changed the one-way arrow on the diagram I made to replace the “pattern and process” one of tallgrass prairie and fire? These two-way arrows are how “there is no ‘take’ in the living world” manifests: as Relationships, Reciprocity, and Relational Accountability. These are the natural laws, as unbreakable as the law of gravity, that govern the natural world of ecosystems into which all human beings and all our plant and animal, stone and water and wind, sun and moon and star nation relatives are naturally woven. Indigenous law weaves these natural laws into a system of jurisprudence that can help us defend life itself against a culture that is, for reasons unknown, so blind and deaf to all the forms and sources of Knowledge that it can actually suggest it is “wise stewardship” to simply steal less money, food, clothing, and furniture from your mother,  or that laying a rug over the place she had a heating stove you’ve ripped out and taken to your own house is somehow “restoring” her home.

Also remember this: The Land heals itself after wildfire. Human meddling to “fix” a land burned by fire only prolongs, and very often prevents, that natural, restorative process of healing to take place. Do you see the power struggle here, between people of Western culture and the Land, over who is in charge of restoration? The same struggle manifests in coastal ecologists’ disagreements over the fate and future of coral reefs damaged in tsunami. Does the Land heal itself because it is powerful and alive? Or must humans “fix” the land because it is an inanimate object and therefore only capable of being glued back together like a broken dish that will never be truly whole again? Who really has the power here?  Look at the first two sentences of this paragraph again. What does wildfire tell us?

Wildfire is the paradoxical, restorative and regenerative power inherent in Reality itself. Its quadrant of West is the source and wellspring of resilience, the characteristic that emerges from whole ecosystems in a way that gives the Land a memory of the past it can draw upon in a time of crisis and loss to restore wholeness. Humans also have resilience, at individual as well as community levels. Resilience is a characteristic of living things. It is engendered by the turbulence of West. Do you not see what this means about the Land, that its powerful ability to heal its own self is written into the very fabric of reality?

The gift of West is RESILIENCE.

Let us move around the Circle to learn about this from the wisdom of North.