Note: The summarizing introduction in italics, below, appears at the beginning of three separate pages, each of which reconsiders an example of human efforts to mitigate a natural hazard. Once you’ve read it, you can skip directly to the main text on subsequent pages.

Understanding that ecosystems are complex systems, rather than mechanistic ones operating via linear cause-and-effect, dramatically changes how we perceive Western culture’s strategies to mitigate natural disasters. McPhee’s Laws provide a powerful low-jargon way to think about the situations described on these pages. Resilience ecology offers conceptual language — robustness-fragility trade-off (RFTO) — that often seems more rigorous and legitimate to people in Western culture. It also adds a human-impact component that McPhee addressed more in terms of conflicting stakeholder demands.

(1) By becoming robust to a particular set of disturbances, complex systems necessarily become more sensitive to disturbances outside that set. Fragility that emerges from RFTO is dangerous because its presence is usually not visible until it’s revealed through unexpected failures (Ishtiaque et al 2017).

When the lower Mississippi River used to regularly flood, it would overtop its natural levees and drop silt carried in its waters onto adjacent lowlands. When flooding was prevented by engineered systems of gates and other structures, the river had to drop the silt it carried into its own riverbed channel instead. River carries sediment and that sediment settles out of water at some point. It’s a simple matter of stream hydraulics. The silt that the river dropped in its own bed when it could no longer drop that stuff on the floodplain piled up in the floor of the river channel, which raised the river surface high enough that it threatened to crest the levees and flood again. To prevent a new round of floods, the Army Corps of Engineers started dredging the river channel. But it also built the levees higher so the river couldn’t over-top them. In this way, step by step, the entire river channel and its levees slowly elevated themselves higher and higher above the surrounding land. At the same time, just as we saw happen in coastal Bangladesh, loss of new sediments from flood deposits caused subsidence of the delta and the city of New Orleans built atop it. As a result, New Orleans has wound up so far below the levee-bound elevated river channel of the Mississippi that “The river goes through New Orleans like an elevated highway. . .  and if somehow the ships [on the river] could turn and move at river level into the city and into the [Superdome] stadium they would hover above the playing field like blimps” (McPhee 1989:61). The levees, gates, and locks that keep the river in its channel must be constantly maintained to prevent catastrophic flooding.

To summarize the situation: (1) Erosion constantly moves and removes the sediments of a delta, but the river that creates a delta constantly deposits new sediments. So erosion and deposition remain in balance, with temporary changes in gain, loss, or rearrangement of sediments (in new sandbars or deltaic land areas) as storms, drought, and floods move through the system. (2) Because the Mississippi doesn’t flood its own delta very often any more, deposition of sediment on the delta has dramatically decreased. Yet erosion continues. So the delta is slowly eroding and New Orleans — which sits on top of it — is sinking as a result. (3) Roughly half of New Orleans is now below sea level, some areas by as much as nearly 7 feet (as of 2021). (4) Hurricanes with onshore winds and tidal surge pose an increasingly serious threat of flooding to a city that’s sitting inceasingly far below the level of the sea at normal, non-storm times.

Can we fix this? What if you could put the Mississippi River back in its bed so that seasonal flooding could restore the delta and raise it above sea level again? Remember that these days the river is sitting in its own elevated riverbed. So that would have to be blasted or dug out and hauled off for the river to be lowered back to its original level. Of course, it would have no levees at that point any more. Nor would the bed have the natural twists, turns, and meanders the river created naturally in its historic flow. So the “restored” river would be in a man-made bed. But let’s say we could do that. So now we let the river flood so it can deposit silt on the delta again. But that silt won’t insert itself back underneath New Orleans to lift it up again. Instead, the new floods would carry that silt into New Orleans, still sitting in a bathtub below sea level, and fill its streets, homes, and businesses with mud. If you removed the silt after the flood (the expensive remediation of flood damage), then of course there would be no deposition. So you’d have undone your own goal. If you somehow convinced everyone in the city to let the mud remain so the New Orleans delta could grow back, then the silt still would not lift the city back up above sea level. It would slowly bury the city instead.

In addition to all these problems, the elevated Mississippi is now so much higher than the rivers that intersect its course in the lower reaches that gates and locks are required to keep the water coming down the Mississippi from literally falling into an intersecting river channel lower than its own. If that happened, the river water would suddenly take a completely different route to the Gulf, leaving the lower reaches of the Mississippi below that point nothing but a stagnant highway of mud (McPhee 1989).

System fragility increases as the river climbs ever higher over a delta that continues to sink, and the Sisyphean task of maintaining the engineered system that keeps water from finding its own level again slowly but steadily grows — as does its cost.

Unfortunately, as long as the river has to be dredged and gated and maintained anyway, people don’t stop there. People want to keep engineering it more and more, to satisfy the desires of more and different stakeholders. As one example, more than $45 million has been earmarked for the coming fiscal year, solely for the Army Corps of Engineers to dredge the Mississippi river channel more deeply than it already is — enough for a new class of super-large ships to get 256 miles up the river, to Baton Rouge. This $45 million is in addition to $85 million in federal funds spent on the project in 2020, plus another $100 million paid by the state of Louisiana and local owners (Schleifstein 2021). Of course, a river whose channel is dredged deeply enough to accommodate a new larger kind of ship is going to fill itself back in. So this project, the purpose of which is economic gain rather than risk mitigation, isn’t just expensive now — it’s going to be on-going very expensive for literally as long as the system manages to keep going. The question that no one involved asks is: how long is that realistically possible? How long will the resources required to maintain this sytem continue to be available at the necessary level?

Population density of the lower Mississippi river and New Orleans is higher and distributed differently than it would be if residents remembered what floods there used to be like (although hurricanes fueled by climate change seem to be trying to remind them). But people rely on the engineered system the same way residents of coastal Japan relied on seawalls to protect them from tsunamis. Golden Meadow, Louisiana sits even farther out on the delta than does New Orleans, at an official elevation of 0 feet. The map below shows its location. 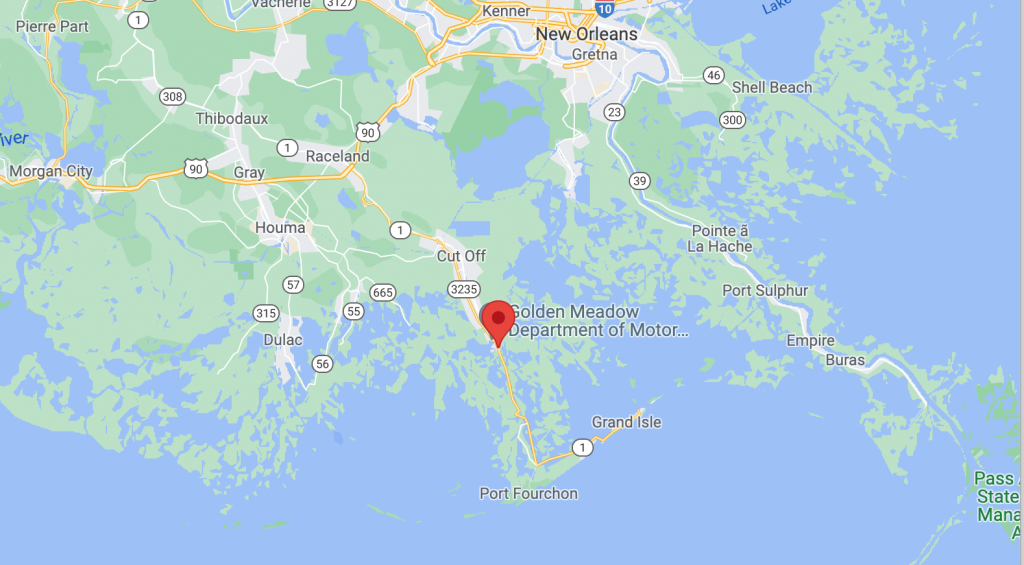 The interplay between river water, sea water, and sediment at the finger-like ends of a delta are ones of constant change. Under normal conditions on a delta of this type, storms wipe out some of the land masses and create whole new ones that disappear in the next storm. People can only build towns on such land by doing something to stabilize it against the sea, river, and mud. In Golden Meadow, they’ve done this by building a ring levee. You can see the one around Golden Meadow below.

People move into Golden Meadow because it’s protected. They feel safe behind the ring levee. As Ishtiaque et al (2007) pointed out, this leads to the well-documented “levee effect”. And in fact, when Hurricane Ida’s 150 mile per hour winds (240 kph) pushed the seawater into swells, the sea reclaimed Golden Meadow long enough to be a problem. The photo below shows Golden Meadow invaded by the open sea during Ida.

The “pinning down” of the once-meandering river course has also caused loss of social memory about the dynamic way rivers naturally and periodically change their courses in low-lying deltas. So even residents who might have some notion of flood risk farther up the Mississippi are often not aware of the risk of building multi-million dollar river-dependent businesses on the banks of a river that could change course and abandon its channel at any moment, should its waters literally drop into a less elevated river channel. The Corps of Engineers knows the risk, though, explaining that if the river escapes the Corps’ desperate grip, it “could cause the United States to lose nearly all her seaborne commerce, to lose her standing as first among trading nations” (McPhee 1989:7).