The most important barrier between Western culture and the natural world is epistemic. Blackfoot Elder Narcisse Blood stood outside the actual walls of an historical fort near his home on the northern Great Plains when he addressed the underlying fear of the natural world this barrier enforces and reinforces: “The basis for our relationship with the newcomers was fear. The fear was in the form of the forts, and those big walls they put around themselves to keep them safe from the natives and thus the environment. That metaphor of the fort, for me, is really, really played out with universities. Universities think they know everything. They’re afraid to go out of those walls . . .” (Adams, Wilson, Heavy Head, and Gordon 2016:55).

Cree scholar Cash Ahenakew points to the existence and significance of the same barrier, envisioning it as an abyss rather than a wall. Either way, wall or abyss, the barrier is absolute and almost impossible for people of Western culture to scale or traverse.

” . . . when Indigenous knowledge is recognized by mainstream knowledge production mechanisms, it tends to be presented through the frames of Western epistemology rather than on its own terms. Yet, as Battiste (2002) suggests, ‘there are limits to how far [Indigenous knowledge] can be comprehended from a Eurocentric point of view’ (p. 2). Western frames cannot comprehend, for example, the way Indigenous knowledge places ‘animals, plants, and landscapes in the active role of teacher’ (Marker, 2004, p. 106) or the notion that knowing ‘literally comes from the ground, above, and beyond, from the wisdoms of continuous metaphysical engagements and familiarity with “all our relations’” (Ahenakew et al, 2014, p. 222; see also Battiste & Henderson, 2009). Santos (2007) refers to this limitation of Western legibility as ‘abyssal thinking’, stating that, on one side of the abyssal line, there is knowledge considered to be objective and to have universal worth; on the other side there are values and traditions with only local (if any) value. Those who lean towards the edge of the abyss to explore what they can see perceive themselves as objective, neutral, and transparent (devoid of ‘culture’) and select and describe what they see according to what can be made intelligible within their own cultural referents and imaginaries” (Ahenakew 2016:327-328).

That last sentence, of course, describes the act of cultural misappropriation, which Ahenakew insightfully frames within the context of Western culture’s epistemic fort. Basically, because Western people cannot leave the fort they’ve built without facing whatever dangers they imagine its walls protect them from, they must import anything useful they spot outside their walls. The problem is that only a simulacrum can be imported, because bringing something Whole across a barrier erected against the natural world strips it of the very properties that made it appealing or worthwhile to begin with.

Western culture’s epistemic fort even creates the problems we are trying to resolve with the online exercise format of this “paper.” Academic journal format privileges intellectual ways of knowing (analytical discourse, print media) as the only valid episteme, and the format is highly linear, with a bottom line conclusion that must be overt and explicit enough to express in an Abstract. These formatting and content requirements marginalize ways of knowing as well as people (Ahenakew 2016), since videos, three-dimensional art objects, dance and music experiences, walks in natural habitats, hawk fly-bys, wind gusts, and other non-Western pedagogical means cannot be included. That’s, of course, why I published this work online, using html coding and cross-links to try to give Knowledge an opportunity to weave itself within the reader as it does in real life. I feel fairly certain the same problem is responsible for the complete inability of the larger academic community to understand complexity theory or integrate its paradigm into their lives and work.

All of this this “separation from nature” rhetoric is very hard for people of Western culture to accept, however. They often deny their estrangement from the natural world with vigorous declarations of how frequently they camp out, climb mountains, or raft rivers. But when people of Western culture go out on the Land, they bring their epistemic walls with them. Constant activity or noise are actually two of the means by which they epistemically wall themselves off from the natural world even when they’re physically in it. Another means of physical withdrawal from the natural world is closing the eyes to engage in “inner journeying” or projecting (as opposed to the very different act of closing the eyes to focus on other sensory input and enhance perception of the natural world). 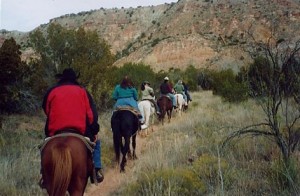 Here is a very short story. In 2001, we held a meeting of Indigenous people in a sacred place called Palo Duro Canyon that is now in the state of Texas. It is a state park these days. One of the things we did to connect with the Land there so it could help us with our work was arrange to take a trail ride through the park. (That’s our group in the image on the left.) At the end of the ride, the wrangler who had led the group shook his head, smiling, and observed that he had never before led a group that had been completely silent the entire time. Usually, he said, there was a great deal of loud conversation. But this time he had heard not a word. There had been a few spoken comments, however, that he could not hear. They were occasional quiet and friendly remarks directed to a horse by the person riding it.

The fort of Western culture is a traveling sealed bubble of various types and dimensions. The result is that, as one example, even people who have lived all their lives in a city perched upon the Arizona Sonoran desert, who have driven through it, hiked it, and camped on it can sign it away to a mining company for abusive and ultimately lethal exploitation. Without Western culture’s epistemic walls, they could never do this. They would find it ethically horrifying to even contemplate. And it would be ethically horrifying because they would know that any short-term gains that might accrue would lead to long-term harm whose mitigation is unsustainable and impact is inevitable.

When Narcisse Blood says “The basis of our relationship with the newcomers was fear,” who does he mean was afraid, and of what? What present-day manifestations of this fear does he address?

Here is a short passage from the longer one cited above (Ahenakew 2016:328): “Western frames cannot comprehend . . . the way Indigenous knowledge places ‘animals, plants, and landscapes in the active role of teacher’ (Marker, 2004, p. 106) or the notion that knowing ‘literally comes from the ground, above, and beyond, from the wisdoms of continuous metaphysical engagements and familiarity with “all our relations’.” If you think about going to a Place that wishes to help people of Western culture start a shift into this paradigm, through a mentored learning experience with living Land, how does it make you feel, emotionally? If you probe that feeling, what sorts of things do you discover?