I find myself finishing this work on the Winter Solstice. This seems very meaningful. I first posted that crazy manuscript I described in the Evaluation Matters journal issue back in August. Then the Land began to insist that wasn’t going to work. One thing led to another, and you’ve just finished working through the result. We’ve taken quite a journey together. I think both of us need a closing ceremony.

Art can be Ceremony. I am a registered Choctaw artist. So I am sharing a piece of digital artwork here that I made some years ago. I wish to gift you this art and invite you to save a copy of it for your own personal, but not commercial, use. The image was composed from pieces of many different photographs that were taken of a pond and surrounding trees, part of the very great Land partner with whom we were privileged to work for a time. Many artistic elements were added as I worked to invite the Winter Solstice itself to speak through the image.

Thank you for putting in so much time to try to understand the Land and Indigenous people. After you save your copy, please scroll down to read my words of good-bye and gratitude. 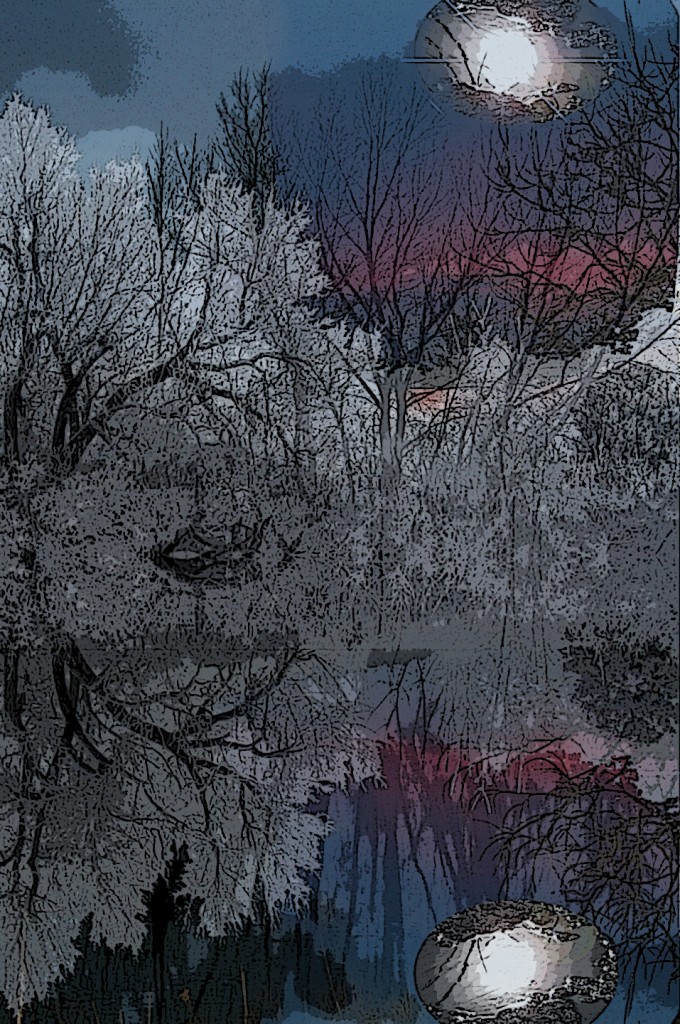 I have said we face an Age of Winter, but what I have not said is that it’s been going on for many generations already — far longer than the part of the story you heard in the presentation on prairies. That’s not a thing a person can know if they don’t live close to the Land and treasure its voice and presence. The point is that Winter Solstice matters to a lot of people, and has for a long time. Think about the difference between the kinds of things that happen around the third week of December in a number of different Western cultural traditions, compared to what happens during the third week of June — which is of course the time of Summer Solstice. At least, in the northern hemisphere it is.

Don’t you think it’s interesting, this difference? It has always made me wonder if people in Western culture sensed the Age of Winter they were creating by running from winter itself, and always knew it would have to be faced. So much of what happens the third week in December involves the return of Light. People talk about Solstice at this time of year with so much hope and expectation that, as a very young child, I thought winter itself must be ending. When I realized differently and told my father, he laughed and said the same thing had happened to him as a boy.

What I want to leave you with is the deep sense that whatever is coming to fruition is a return of the Light. I’m older now, so I know that even after the sun begins its long journey back we still face the coldest and hardest times of the winter. But that doesn’t change the fact that it feels different just to know the Light is moving again.

Thank you for being in relationship with me during this journey. It has been long and hard on my end. But I have somehow felt warmed by your presence on the other end of this, in the timelessness that shimmers where the Buffalo are even now winding sunflowers about their horns, and an Indian pony looks up when a hawk whistles on the wind.

Yakoke. Thank you. Good journeys to you always, in all that you do.

But more than anything: Yakoke, thank you, Land and Ancestors for guiding me, for sending Vision, and for showing me in Dream how it might be possible to share that Vision.