Gazing at the Entrance to the Forest, Part II

1. Recognizing obstructive habits of thought and perception that arise from the humanus and humana.

The simplest way to understand the obstructive role of habits in thought and perception of the natural world is to consider how the humanus and humana influence the ways people of the dominant culture see Indigenous peoples. Everyone tends to project their own experiences onto others (102). People of Western culture – who have a strong humanus that Fears and works to Master Ruthless nature with technology – project their fears onto Indigenous people. Since they see the technology of Indigenous people as insufficient to protect them from nature, sociologists and anthropologists typically interpret the actions and spiritual practices of Indigenous cultures as attempts to deal with a “primal” fear of nature. Three statements from published sources illustrate this projected fear:

“This view supposes that [so-called] primitive peoples felt the same sense of alienation in natural surroundings as do people of the Western industrial society,” writes Vine Deloria, but “. . . this basic scenario is wrong, for we do not find a cringing fear of the environment in tribal peoples. Instead they are keenly aware of rhythms and activities that scientific people cannot begin to fathom.” (106) The fact is that the fear Western scholars are so certain Indigenous and prehistoric people feel and felt in the presence of nature is that of their own humanus. The degree to which your own humanus may be protesting at this moment — “But nature really is dangerous! And to think otherwise is foolish!” — reveals its power in the unconscious mind. This is what makes developing an alternative way of perceiving the natural world so tricky for people of Western culture.

People of Western culture also project the humana onto Indigenous cultures. Some people think Indigenous people live in a Best Friends motif where deer play tag with them and wolves come to their hands as wild pets, which makes cross-cultural understanding difficult. But that’s not the primary place the humana projection plays out. Remember the despair of Gilgamesh, tears running down the sides of his nose when he realizes he has lost Enkidu forever – and remember that Enkidu is Gilgamesh’s “other half,” the humana created to balance his humanus. Western culture’s inherited grief over loss of the humana has been projected onto Indigenous people since European explorers first encountered them. Two examples illustrate:

Habitual ways of perceiving nature are even more deeply ingrained than are habitual ways of seeing Indigenous people. The perspective of the humanus strongly dominates Western cultural views of animals, plants, atmospheric storms, and flowing waters — and completely excludes all the non-material elements that taken together with the others constitute nana moma. A person attempting to free him- or herself from these habitual patterns of thought must practice identifying the four major motifs of Fear, Master, Best Friends, and Animals Only/Pristine Wilderness and use them to discern the presence of the active humanus or humana in popular culture, academic materials, and personal conversations. Only then is it possible to start gaining awareness of its presence in private thoughts and personal actions.

2. Finding opportunities to become personally engaged, in meaningful ways, with the natural world and an appropriate teacher or mentor.

A person who has learned to recognize and set aside the humanus and humana, and who has started to recognize and empower the voice of the nana moma within their own unconscious mind, is ready to take steps that can start developing this part of the psyche. But finding appropriate opportunities and wise teachers requires care and discernment. People of Western culture who are used to uniform and standardized “best practices” and “certification systems” must understand that such things are largely inimical to Indigenous cultural worldview. But remember that the nana moma focuses on processes of relationship rather than on material things, so this provides a good rule of thumb for assessing a given learning opportunity. One that focuses on material objects such as clothing or ritual items, for example, may not facilitate learning the processes of engaging creatively with the natural world in a meaningful way. An example of one that focuses on process looks like this: “What I would like to demonstrate through our courses,” says Blackfoot teacher Ryan Heavy Head, “is a way of life that comes from a certain place – that is connected to the ecology of that place, that reflects that ecology, that’s part of it. . . . What I don’t want is: I don’t want to be teaching people ‘how to be Blackfoot.’ I want to show them an example, give them an ethnographic example of what it means to be Indigenous and be connected to Place, and how that comes about. And then they could reconnect to Place there.” (109)

Novels, poetry, non-fiction writings, and art by Indigenous authors and artists can also help create opportunities for developing a stronger and more consciously accessible nana moma. These learning methods have the advantage of being a more readily available or practical option to people in urban areas but suffer the grave drawback of not connecting the learner with the Land itself through processes of intimate engagement. Consciously using Different Ways of Knowing and Learning about the natural world, particularly Mythic ways of knowing as we’ve used them in this paper (110), can permit at least some level of engaged participation in these venues and help offset the serious shortcomings of learning that isn’t from and with the Land itself. But as Vine Deloria wrote (111): “American education is still limited to the fourth quadrant. It does not heal those ancient breaches in the worldview . . . But there is something that Indians and non-Indians can do well and must do in the future. We must look at the Indian worldview not as primitive but as one that was generated by experiences in nature.” It is essential that, in the end, learners set aside the voice of the fearful humanus, step off the beaten path, and engage with nature itself. For the Land is the ultimate teacher.

The picture below is not of a place that is Ruthless. Nor is it of a place that’s Idyllic. But it is also not a place “that anyone can wander out into the landscape and derive these insights and similar bits of information.” (112) Yet with the right opportunities for learning, and the hard work required to change habits of thought engendered by the humanus, this place can be home again — in a way that people of Western culture deeply remember and desperately long for.

Robert Frost would have welcomed the chance. 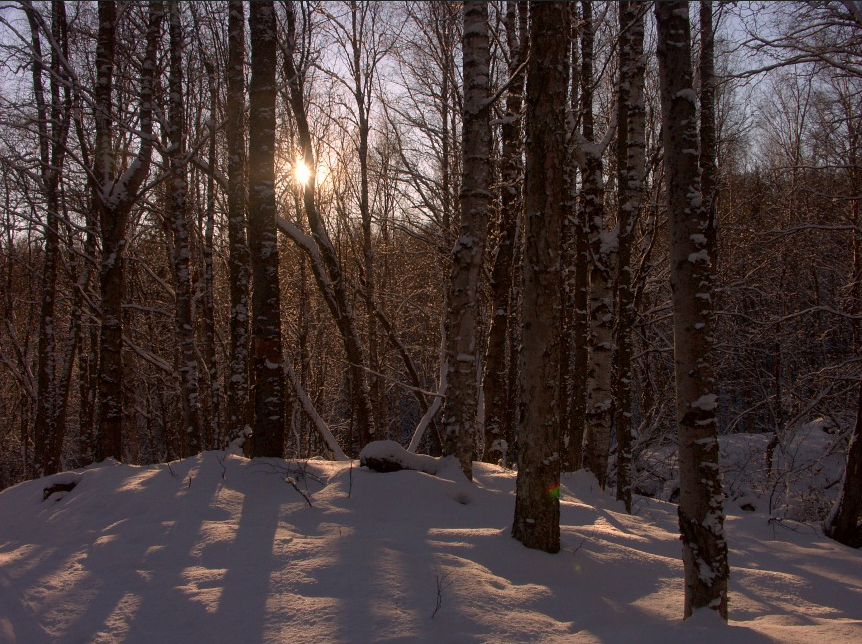 Please consider making a tax-deductible donation to Tapestry using the button below so we can continue to provide information on reconnection to the natural world.  Thank you for your support!

References, Notes, and Credits
for
Gazing at the Entrance to the Forest, Part II

102. See the quote by Jung’s colleague Erich Neuman on page 15 for a brief review of the way the same type of projection, but with respect to the anima and animus, impacts both interpersonal and cross-cultural understandings of gender and sex.

105. “History of Religion” at History World website. Written by Bamber Gascoigne, author of numerous books and history documentary films, Trustee of the National Gallery, Trustee of the Tate Gallery, member of the Council of the National Trust, and member of the board of directors of the Royal Opera House, Covent Garden. http://www.historyworld.net/wrldhis/PlainTextHistories.asp?historyid=ab70#ixzz3f3YH3gbN. Accessed July 5, 2015.

106. Vine Deloria, Jr. 1999. Spirit & Reason: The Vine Deloria, Jr., Reader. Edited by Barbara Deloria, Kristin Foehner, and Sam Scinta. Fulcrum Publishing Co., Golden, CO. page 64. Although we have cited Deloria in this passage, it feels important to state that the one of us who is Choctaw (Dawn Hill Adams) has yet to encounter an Indigenous person who is anything but puzzled, frustrated, and somewhat offended when told by Western scholars that “of course” Indigenous people are afraid of nature and all their cultural practices are contorted efforts to appease nature and feel safe. Simply stated: Fear of nature is an absolutely foreign concept to people of traditional Indigenous cultures. Respect is another and different matter.

110. Tapestry Institute’s learning programs emphasize process and relationship. Publications and presentations provide learning opportunities to larger groups of people but are necessarily more academic than applied even though the intentional and highly structured use of Myth permits a level of engaged participation in these venues.