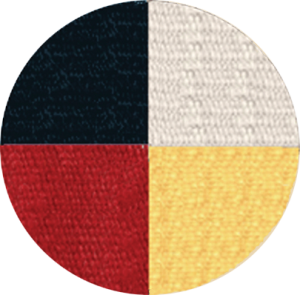 Several different, but interconnected, Indigenous-led environmental projects happened in the Story you just read. The family learned things and laid out plans for how they would hold the Center for their Land to heal from decades of mistreatment that led it to burn in a last-ditch effort to heal by starting over again. During this Indigenous forestry project, Elders traveled back and forth several times to consult with the family. One of the things IKhana Fund will support is travel like this, that permits Elders and Knowledge-Keepers to interact with individuals and groups carrying out environmental projects. You also saw an Indigenous college student gathering data, and her professor visiting the field site to collaborate. Later the same student explained that she was going to conduct more formal research on the subject, and even later we learned that she established a research program in the field. These are all Indigenous environmental projects too, and IKhana Fund will support this type of work.

Beyond this basic introduction to what Indigenous-led environmental projects look like, you’ve also just been introduced to the basics of Indigenous worldview itself. The links, below, on this page are not “required reading.” They simply provide opportunities to better understand and appreciate the Story itself more, and to think more deeply about the ideas the Story expresses. For instance, you might want to learn more about wildfire’s relationship to the land and the animals. There’s also the important subject of how the health of land and people (including animals) is connected. Or you might be intrigued by the simple fact that everything we’ve done here is based on the idea that learning can come to you through a Story at all — and come to someone like the grandmother in a Dream, too. Remember that we told you this Story within the context of explaining how Indigenous environmental projects differ from Western-led projects. The elements you’ve seen in the Story are all essential parts of Indigenous worldview that are unfamiliar to most people in Western worldview. The links on this page give you a chance to explore them more deeply, now or later as you prefer. Just skim down the list and follow up on whatever catches your interest.

To learn more about wildfire ecology through an Indigenous lens, you can read the webpages Mitigating Wildfires in Forests and A Deeper Look at Wildfire. Both pages are parts of an online learning exercise about an Indigenous view of mitigating natural hazards such as wildfires and floods.

To learn more about the idea that fire is a relative, as are animals, plants, waters, and winds, explore this page about how all these things are our relatives, which is part of the same learning exercise just cited.

To learn what’s missing from the picture of The Place You Want to Be (with the whale and the mountain lion, the forest and the ice and the sea), check out this different story. It’s an absolutely true story, by the way, meaning one that was filmed by a  news team. Then, after that, if you still aren’t sure what’s missing from the picture, read this story told us by an Indigenous Elder. Then think about it: What is missing from that picture? If you still aren’t sure, take a look (again) at the picture on the top of the main IKhana Fund page. Or read the next resource, below.

You can get insight into the roots of Western culture’s perspective about wildfire in this 2015 Tapestry publication. The relevant page is titled Two views of nature and four motifs of human/nature relationship. There are two separate passages that describe the two different ways people of Western culture see wildfire.

To learn more about why it’s so hard to put things right once humans have stepped in to alter natural processes (as the old fire-warrior uncle realized to his dismay), check out the page of that same learning exercise we’ve cited several times already, about a phenomenon observed and described by John McPhee. If you think you might appreciate a more rigorous scientific explanation of the same general principles, you can find it in this description of the impact of flood-control projects on people living in a large river delta of Bangladesh.

To learn more about Indigenous Knowledge you can start on this page of introductory information and then explore the several pages it links to about processes, means of expression, and source.

The different ways of knowing and learning about the natural world that are important ways Indigenous people acquire the full range of Knowledge available to human beings is introduced here. The suite of education pages that link off that introduction form the core of Tapestry’s mission area. Be sure to check out the examples of how each different way of knowing applies to the ways we understand and respond to one aspect of the natural world. In this case, the example used is tornadoes.

If you would like to learn a little more about why the grandmother put down tobacco when she prayed, you can read this paper. It also explains many of the other concepts of Indigenous worldview you’ve seen in the Story, including the relationship between the land and people

The relationship between the health of land and people (including all the animals) is also described in these two pages from the learning exercise about mitigating natural hazards you saw earlier. Check out Healthy Land, Healthy People and then, if you’d like to learn a little more, Health in Individuals, Communities, and Ecosystems.

To learn more about the importance of Indigenous values regarding the Land, especially in a time of ecological crisis, you can listen to a short video by Onandaga and Seneca Faithkeeper Oren Lyons. This highly respected Elder calls for nothing less than a “value change for survival.”

Finally, there really are Indigenous people doing research such as the kind that the college student granddaughter began during the Story, that continued to be carried out afterwards by those she taught. But although everyone thinks this kind of work that weaves Indigenous Knowledge into science is vitally important, it’s essentially impossible for anyone to get funding that will support it. That’s because organizations that support research with grants do not recognize Indigenous research methods (and yes, those do exist). Indigenous graduate students, faculty, and researchers are among the important people whose work IKhana Fund will support.

Click here to return to the main page for IKhana Fund. Yep, you just finished your introduction to Indigenous environmental projects that are powered with Indigenous Knowledge. Congratulations!