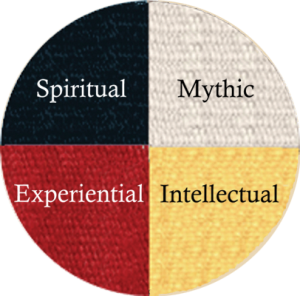 You might have already seen this Circle diagram Tapestry uses to explain the variety of  ways people know, learn about, and respond to the natural world. People in Indigenous traditions generally acquire information from all these kinds of sources, and integrate them so that genuine Knowledge can emerge. People in Western culture often have a hard time with this practice. Instead, they frequently disagree about which type of knowledge is “really true.”

One major cause of Western culture’s attempts to validate only one way of knowing is its rather famously dualistic either/or mindset. Dualism, the idea that the process of logic permits people to distinguish true things from false ones and that things are absolutely either this one thing or this other thing, manifests itself in the either/or, yes/no decision trees, flow charts, and branching diagrams commonly found in business, scientific, and political settings. In logic, the “roadmaps” of possibilities that flow down a decision tree are locked in place by the choices made upstream. Once a choice is made in a decision tree, every point under that branch must accord with that premise. It can’t “hop across” the decision tree to a different branch under the “opposite” choice.

Indigenous cultures have a very high tolerance for the ambiguity that arises when “downstream” things on a decision tree suddenly hop across to another side. It’s perfectly agreeable for an Indigenous person to say that horses evolved in the world’s grasslands ecosystems over a 55-million year period, and that their nation’s traditional tribal Story of how horses first came to those people is also true.  A person of the dominant culture who encounters the “opposite” view in an Indigenous friend will frequently exclaim, “But you said you believed science!” or “But you said you believed traditional story!” To the Western friend, that point of branching dichotomy is very high on the decision tree, and it determines everything that follows. But many Indigenous people highly value the power that exists in holding very different interpretations of a thing in a single grasp, loosely held but close together, to see what larger or greater understanding emerges from the relationship between these different things. So Indigenous cultures not only tolerate ambiguity but usually embrace it as a valuable source of wisdom. As you can see from the horse example, when either/or dichotomy vanishes, the simplistic associations of “if this, then of course necessarily that” also vanish. Limited numbers of potential pathways multiply and branch in complex ways that have no a priori logic-based limits. So we never have to feel alarmed about thinking that “if we think this way” then “we must also accept this.” It’s simply not so unless one lives in a dualistic worldview.

The natural world doesn’t seem to care that much about adhering to human logic. Some branches of science have begun to acknowledge this, a topic far beyond the scope of this webpage. The point we want to make here is this: Reality is much richer than any dichotomous possibility. When we work with the Land, we are working with Reality.

Click here to return to Signposts to Watch For.

Or use this Menu to visit previous pages:
How We Work
Learning in Community
Mindful Awareness
The One Big Rule
Traveling a Different Path